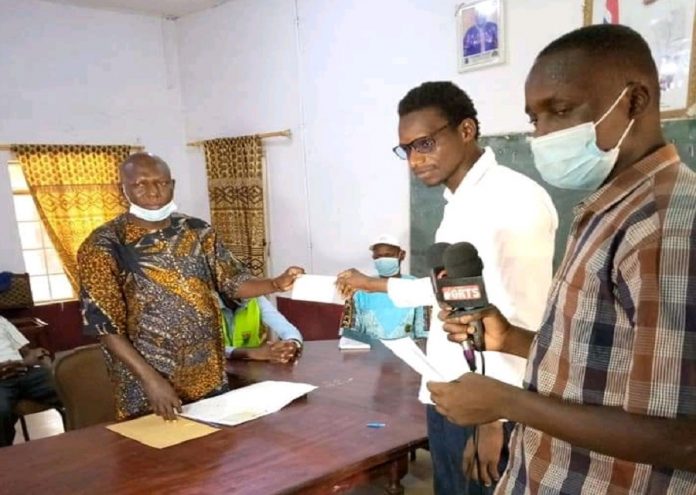 The assistant marketing manager at GNIC, Abdou Ceesay explained that D50, 000 is for the fire disaster victims and another D50, 000 is to support Council’s fight against the spread of Civic-19 in the region.

“The remaining D180, 000 is to indemnify our customer who was a victim of the recent market fire disaster and the only victim who insured with our company”, Ceesay said.
Mr Ceesay assured the people of URR of GNIC’s continuous support and urged them to insure their properties and businesses.

Hendry A Imo, the owner of Zubes Enterprise, and a businessman at the Basse market received a cheque of one hundred and eighty thousand Dalasis (D180,000.00) as indemnity for insuring his business with GNIC.
Henry thanked the insurance company for fulfilling their promise made at the time of purchasing the insurance cover.

The deputy chairman of Basse Area Council, Yuba Jawara said the post Covid-19 campaign launched by his council is an important initiative meant to support the tax payers during and after the pandemic.

The Chairman of the Basse market committee, Karamo Sanyang and the Alkalo of Basse Sellu Bah, thanked GNIC for their support.
The Alkalo acknowledged the immense contribution of GNIC to the welfare of people in the region for over two decades now whilst commending the Council for the foresight in launching the post Covid-19 initiative.

The Chairman of Basse Area Council, Foday Danjo also thanked GNIC for supporting the fire disaster victims and their post Covid-19 campaign to gather funds to fight the pandemic.

Chairman Danjo further highlighted the significance of insurance and encouraged the people to insure their businesses as well as other properties.
The deputy Governor of Upper River Region, Samba Bah expressed similar sentiments and assured GNIC that the money donated will be used for the intended purpose.