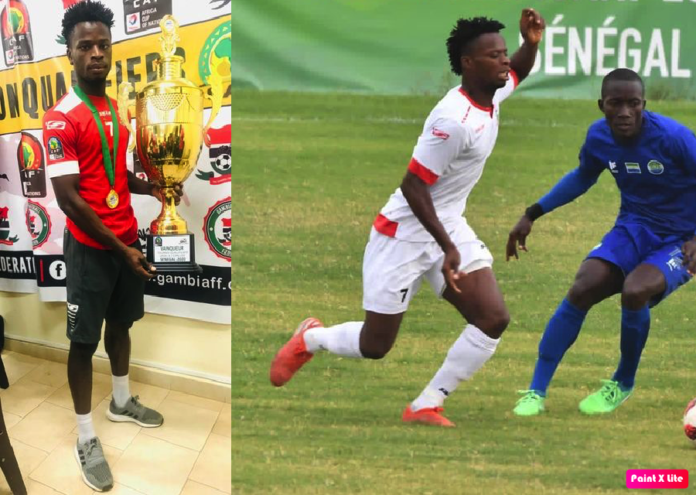 Born into a family of farmers in Sifoe on February 7 2001, Habibou Mendy chose to be a different child in Mendy Kunda by taking up a huge interest in football.  He would play in a space beside their compound to the delight of his father.

Habibou is an agile left full back who plays for Brikama United FC in the GFF Division One.

His dream of becoming a footballer was quickly noticed by his father who would buy balls for him and delightfully watch his games in a small space around their house, unlike his brothers who would be busy on the farm.

“Apart from football nothing interests him and our Dad encouraged him a lot in his passion,” Sanna Mendy, Habibou’s elder brother told The Standard.

Habibou was spotted by former Brikama United head Coach Sulayman Kuyateh who watched the young left-back played for Sifoe United in 2015 and wasted no time in luring him to Brikama United.

Habibou agreed to go marking the beginning of his journey in the top flight Gambian football.

It was a slow start for him trying to assimilate into life at Brikama United but hard work paved the way for him.

” I knew I had to work hard for a place in the team. It was hard to be regular in the team because there were very good players who were playing the same position as me but deep down in me, I had the belief that I could make it to the top with hard work,” Habibou said.

He soon established himself as a regular starter for Brikama Utd and since represented The Gambia at Under 20 level in three different Wafu tournaments accumulating two gold medals and a bronze which made him one of, if not the most successful Under -20 player for The Gambia.

His breathtaking performance for Brikama United in their 2018 title winning team earned him an invitation to the Under 20 side that was assembled for AFCON qualifiers and since that appearance, Habibou remained a key figure in Matar M’boge’s young Scorpions. He scored a sublime goal in the final against Senegal in the-not-long concluded WAFU U20 competition in Thies. To Habibou, putting on the national team jersey did not come as a surprise.  ” I was not surprise but to be honest, I was elated and my family too.  My performance was noticed and that alone signal to me that I’ll make it to the team”.

Like many young players playing in the country, Habibou is eying a professional career abroad. He has all the characteristics of a modern fullback.  He is agile, good at set pieces, defends well and also scores goals.