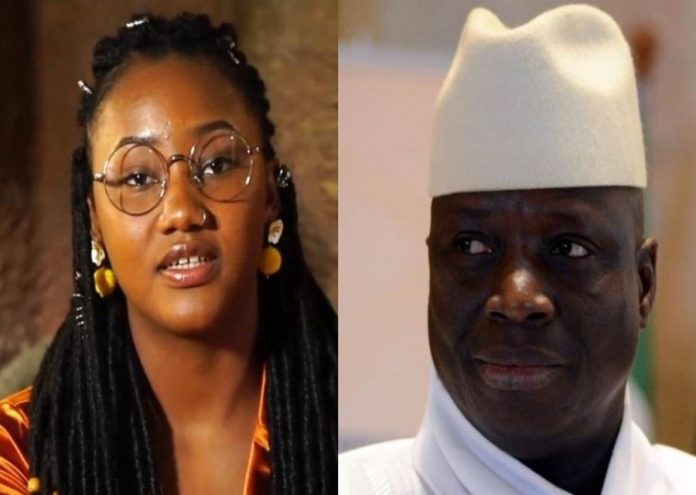 How could a Gambian, a human being doubt the story of Fatoumata ‘Toufah’ Jallow’s [alleged] rape and lean towards former president Yahya Jammeh, the [alleged] rapist? On what basis?
Don’t tell us Toufah should have known better! Don’t tell us she benefitted and never spoke out until today? Don’t even try to sanctify yourself with the slogan “I think for myself” as if someone is thinking for others!
If Toufah is not telling the truth are you saying that Yahya Jammeh is not capable of raping our girls and women! If that is your position then why do you believe the story of Omar (OJ) Jallow or former soldier Mafugi Sanneh or the former teacher Samba Jallow and the several victims who testified before the TRRC of being tortured by Jammeh’s henchmen!
Is Yahya Jammeh capable of looting our national coffers? Is Yahya Jammeh capable of ordering the killing and torture of fellow human beings? Which human being on earth can doubt Yahya Jammeh’s capacity to loot, plunder, kill and torture? If you do then you are a killer yourself!
Toufah is right. Just as Yahya Jammeh caused the murder of our schoolchildren in 2000 and caused the torture of OJ and ordered the murder of 9 Mile 2 inmates so did Yahya Jammeh also rape Toufah and many other girls and prostituted several more women! If you deny these then you are either extremely ignorant or you are covering up for some interest or both!
Rape is a matter of power and trust betrayed! Always remember that! Yahya Jammeh did not only have physical power over Toufah but he also had social, economic and above all political power over Toufah and the dozens of women he raped and prostituted! It is that power that lured Toufah and then enabled him to rape her!
With his political power Yahya Jammeh generated trust in young innocent souls by acting as a benefactor, father and leader who has the best interest of these girls in his heart! The July 22 Pageant was a perfect alibi to project himself as a good person who was out to serve.

It was a good bait to get the people whom he had deprived and impoverished so that he could come around with an initiative to trap and exploit our people further!
I had always suspected that those pageants were a smokescreen for a sinister agenda for his selfish interest. We don’t need a government or president to organise a pageant to support girls education in anyway.

It’s absolutely unnecessary!
The government has a constitutional role to deliver education services to citizens including taking special measures to promote girls education. Those measures should not include a pageant because a pageant has no value in providing education!
It is discriminatory because only girls who think they are beautiful will take part or encouraged to take part.

The scholarship is limited to only winners who constitute an insignificant percentage of schoolgirls. Hence that July 22 Pageant was a national tragedy!
Stand up against sexual abuse and expose rapists and men and boys who harass our girls and women just because they are girls and women!
Let us organise a solidarity march in defence of victims of sexual abuse! The incidence of sexual harassment and rape especially by men in positions of power in government, private sector, NGOs and in our homes and communities is deep and widespread! It got to stop!
As Toufah said, we got to speak up to disrupt our comfort which is a cover-up! We cannot protect men and boys because of their position yet allow girls and women to be scarred and traumatised by these boys and women! We cannot allow so-called culture or family name or deference for any man to make us doubt women’s stories. That would make us as equally guilty as accomplices of rape and sexual violence!
How would you feel if Toufah was your sister or daughter or niece?