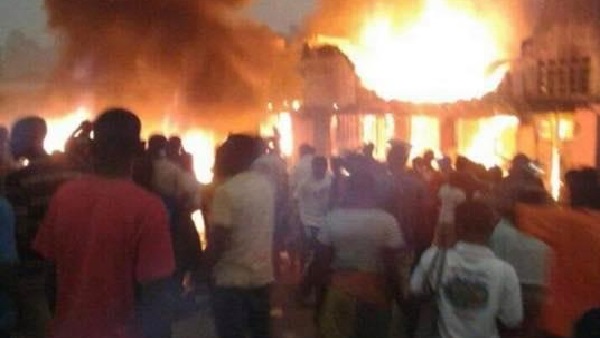 The central market in the Upper River Region capital, Basse, went up in flames Monday night.

According to Mahamadu Kanteh, a native of Basse, the market located in Santo-su has at least a thousand stalls. He could not say how many of the stalls were affected.
However, Kanteh said it was widely speculated that the fire was started by electrical short circuit.

He said the fire began by 7pm and quickly attracted hundreds of people who tried unsuccessfully to douse the spreading flames.
“Over seven forex and money transfer bureaus and hundreds of super and mini shops were burnt. I can safely say millions of dalasis worth of goods and cash were burnt to ashes,” he said.

He said Basse has seen many fire outbreaks but none as fierce or as devastating.
Muhammed Bah,whose shop was razed to the ground, said his losses amount to over half-a-million dalasis.

“This business is my life. My family and I depend on this. This is where we get our sustenance and where I educate my children,” he lamented while appealing to government for succour.

Another victim, Alieu Jallow, said the flames were the biggest he ever saw and that was why it was difficult for the fire fighters and the public to contain it.
Baboucarr Camara said the inferno also razed power pylons in the market area and that petrified the residents.

“This is one of the gravest economic losses to not only Basse but the whole region,” Camara said.

Neither the governor of the region nor officials of the Basse Area Council were available to give update on the matter.

The Gambia Fire and Rescue Services regional spokesman, Pateh Gibba, told this paper last evening that he did not want to speculate as he was not at the scene and promised to give us details today.

Meanwhile, by the time we went to press, it was announced that the regional governor has announced an inquiry into the cause of the blaze. It has also been reported that opposition GDC party leader Mamma Kandeh who hailed from neighbouring Jimara donated D200,000 to the fire victims.