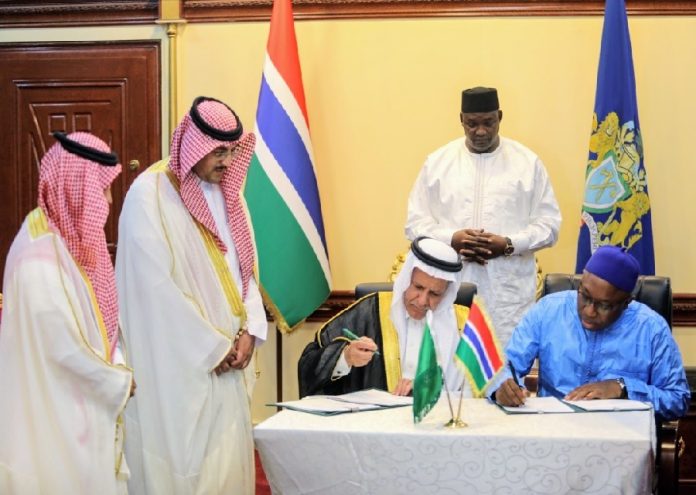 His Excellency, President Adama Barrow on Saturday, February 22nd, 2020 presided over the signing of a $12 million funding agreement between the Kingdom of Saudi Arabia and the Republic of The Gambia at the State House.

The agreement was signed by the head of the Saudi delegation, Mr Yousef IAlbassam as adviser to the managing director of the Saudi Fund for Development (SFD), who doubles as chairman of the Arab Bank for Economic Development in Africa (Badea) while the Minister of Finance and Economic Affairs, Mambury Njie, signed on behalf of The Gambia.

The SAR 45million equivalent new financing agreement is reported to inevitably improve and modernise the Banjul International Airport to meet the required standard in the aviation industry. The project will further improve the infrastructural facilities of The Gambia in preparation for the upcoming OIC Summit in 2022.

Mr Bassam extolled the “excellent relationship” between Saudi Arabia and The Gambia, saying it makes it possible for such agreements. The current state of strengthened cooperation between the two brotherly countries was thanks to His Excellency, President Adama Barrow’s perceptive foreign policy.

“We assured His Excellency of the strong support of both the Saudi Fund and Badea towards The Gambia’s success,” Mr Albassam said.

President Adama Barrow expressed gratitude and appreciation to the king and the crown prince of the Saudi Kingdom for their continued support to the government and the people of The Gambia.

The signing was followed by discussions with The Gambia OIC Secretariat on the ongoing SFD’s funding for the OIC 2022 Islamic Summit in Banjul.
During the talks, Mr Yousef Al-Bassam expressed delight at the progress made on the on-going rehabilitation of the airport.

The Minister of Finance and Economic Affairs used the occasion to thank the Kingdom of Saudi Arabia for their continued support to The Gambia.