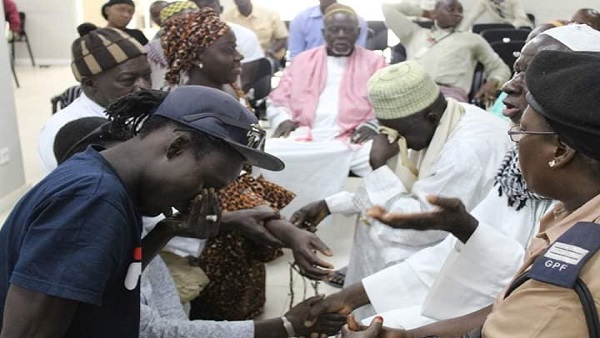 The Truth, Reconciliation and Reparations Commission on Tuesday 10th March, 2020 facilitated a reconciliation dialogue between the son of former and late Alkalo of Jambour and some elders who have testified before the commission during the regional hearings conducted last year.
The officer-in-charge of Farato Police station, West Coast Region was invited to join the delegation.

The dialogue was held following a disagreement that occurred between the families of the former Alkalo, the Imam and other elders of the community after their testimonies and ended up at the Farato police station. The TRRC intervened and the matter was withdrawn by the elders to give peace and reconciliation a chance.

The two sides met at the TRRC premises and had a difficult and frank discussion over the issue, and the son, family and clan of the late Alkalo expressed remorse over the incident that left the community deeply divided. They presented cola nuts and apologised to the Imam and the elders. The Imam and the other elders who were offended in turn accepted the apology and agreed to reconcile and forge ahead for the social cohesion of the community of Jamburr.