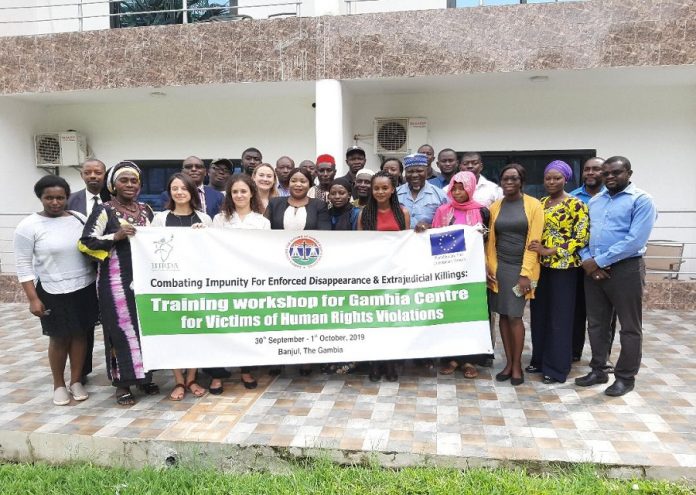 Adama Jallow, the national coordinator, Gambia Center for Victims of Human Rights Violations has challenged the government to hold perpetrators of human rights violations to account.

Jallow made these observations at a capacity building workshop for the Victims Center on international standards and legal instruments to fight against impunity organised by Institute for Human Rights and Development in Africa (IHRDA) and funded by the European Union.

“I take this opportunity to renew our call to the Gambia Government to fulfil its commitment to provide effective remedies and reputations that go beyond establishing mere truth about what happened to the victims of enforced disappearances and extrajudicial killings by holding perpetrators to account,” he said.

Jammeh’s reign was characterised by enforced disappearances, extrajudicial executions, and torture of perceived opponents and despite a population of only two million, Gambians have featured heavily among those trying to migrate to Europe – a consequence of both repression and a lack of opportunities at home.

Jallow said for the families of the victims, hearing the testimonies of the alleged perpetrators has been a painful but pivotal moment.

He said the Victims Center welcomes the attention given to enforced disappearance, extrajudicial killings and other serious violations of human rights committed in the Gambia.

“Ending impunity for extrajudicial killings and enforced disappearances committed in the Gambia will be crucial to the future social cohesion and economic development of the country and failure to ending impunity for these serious human rights violations may well undermine the efforts of the Gambia Government to pursue justice for such serious crimes,” he noted.

“We are committed to support Gambia Government in fulfilling its commitments to improve human rights and to address impunity for enforced disappearances and extrajudicial killings,” he added.

He said the capacity building workshop is an excellent opportunity to support the Victims Center in its efforts to ending impunity.

“The capacity building will also strengthen and enhance the capacity of the Victims Center to support efforts to facilitate redress for victims of enforced disappearances and extrajudicial executions in the Gambia,” he added.

He thanked IHRDA, EU and Trial International for initiating the capacity building workshop.
Amie Njie, head of finance and administration, IHRDA said the objective of the project is to contribute to preventing enforced disappearances, extrajudicial killings and to increase accountability of perpetrators in Mexico, Nepal and The Gambia.

“The training will help increase the capacity of the staff of the Victims Center on how to use legal instruments to fight against enforced disappearances and extrajudicial killings, advocate for justice and the remedies they can ask for,” she added.

IHRDA, an institution based in Banjul is mandated to increase the effectiveness and accessibility of the human rights protection mechanisms of the African Union.