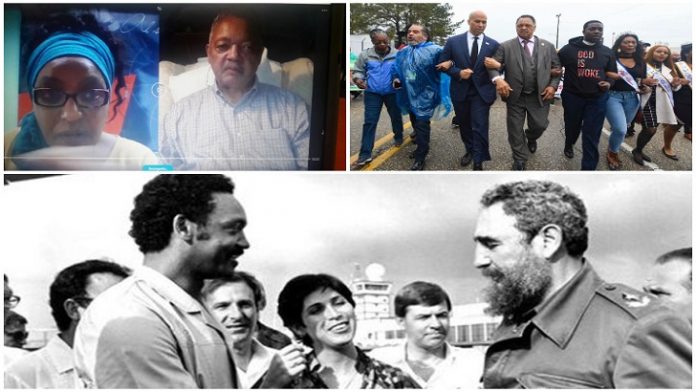 The assassination of George Floyd stoked the fire of the fight for social justice in the United States, affirmed the African American reverend Jesse Jackson, a leader in the fight for civil rights.

He will turn 79 on 8th October. His activism dates back to the 1960s, when he was an assistant to Martin Luther King.
Just that fatal 4th April 1968, he was next to King on the balcony of the Lorraine Motel, in Memphis, Tennessee, at the time he was assassinated. Since then he dedicated himself to trying to achieve the dream of equality that his mentor wanted.
Prensa Latina exclusively accessed the privacy of his Chicago home via Skype to talk to the reverend about the protests in his country after the execution in Minneapolis of George Floyd on May 25.

Also, we talked about the Covid-19 pandemic, its impact on the black population, the November elections and their feelings towards Cuba.
The Floyd tragedy is something “that happens frequently in the United States,” said the founder of the humanitarian coalition Rainbow PUSH.
But this time it was different, “he emphasised,” because Floyd’s lynching was recorded by a camera and the world saw how a white police officer pressed his knee on his neck as he lost breath and died.

He recalled the murders of Michael Brown (2014) and Trayvon Martin (2012) and other cases “in which the police were never incarcerated”.
The climate of the Black Lives Matter movement and in the midst of the Covid-19 and Floyd’s murder “was the spark that lit the fire” of protests against racism, social justice and brutality Police that found an echo around the world.

He noted thatthe pandemichas caused too many deaths in his country and that it is the black population that has suffered the most. Lack of insurance and unemployment disproportionately affect blacks, who suffer the most from the challenges of the disease, added the Baptist pastor born in Greenville, South Carolina.

He also commented that African Americans, who work in so-called “essential services” such as public transportation, are the most exposed to Covid-19 and insisted that the government gave the wrong response to the pandemic, which “worsened the situation”.
Referring to the 3rdNovember elections, the ReverendJackson expressed his support for the Democratic candidate Joseph Biden, whose victory he said is possible.
Jackson, a highly admired figure in the African American community, a key electorate in the US presidential, in turn highlighted the need for voting as a weapon for the exercise of democracy. “It is an obligation for us,” he stressed.

A recent survey published by The Washington Post found that eight out of 10 African-Americans believe that in deciding which presidential candidate to vote for, the Covid-19 outbreak “will be one of the most important or very important factors”.
This week, 36 years ago, the Reverend made his first visit to Cuba, which was followed by others. Perhaps that is why he confessed that he “was connected” to the island a long time ago. On June 26, 1984, the leader of the Cuban Revolution met with him in Havana.
Recognising the work of the health professionals of the Greater Antilles, he emphasised that Cuba’s achievement is to have trained so many doctors and highlighted the internationalist contribution of the Cuban fighters who contributed to the liberation of Angola and the defeat of apartheid in South Africa.

Despite the fact that in 2017, the Rev Jackson announced in a letter to his friends and followers that he suffered from Parkinson’s disease, his voice has not faded and his activism continues.

In his opinion, there must be another method of promoting relationships in the world other than using weapons, a bomb on an airplane, or someone who uses a gun to shoot others.
He considered that “there is a crisis of human rights” and opined that the planet should be like sport, governed by rules.

He joked that he likes sports so much precisely because the rules in the games are fair.
A candidate for the Democratic Party presidential nomination in 1984 and 1988, Jackson may have cleared the way for the first black president in US history to arrive at the White House with the election of Barack Obama in 2008.

Prensa Latina. Sent from the Embassy of Cuba to The Gambia.