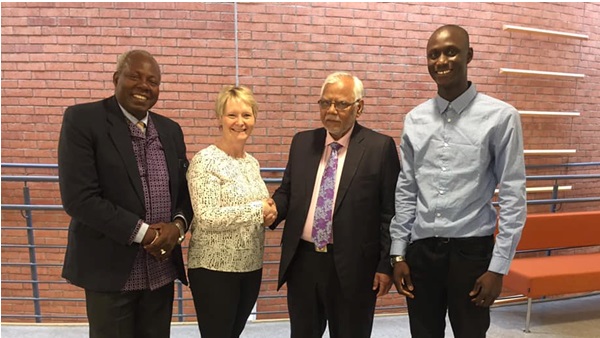 Jimmy Hendry Nzally, a Gambian PhD student at Vrije Universiteit Brussel, VUB has outlined the numerous achievements the University of The Gambia, UTG is enjoying in its partnership with his university.

He said relations between the two institutions were formalised in May 2018 with the signing of an MoU. He said since then the partnership has been a ‘win-win’ situation.
“It all started at the VUB in 2016 when I went for my second masters (first masters in African history at the UTG) in linguistics and literary Studies. I held series of consultation meetings with the head of multilingual master’s programme in the person of Prof. Ann Peeters to discuss the possibilities of supporting the UTG in the areas of research,” he explained.

“In so doing, I shared my experience studying at the UTG and as a working staff in the university’s relations office. Therein, I reached out to the vice chancellor of the UTG to organise a Skype call. This continued as I engage with the VUB International Relations Office as well as the student council and the International Student Platform as the chairperson. I was supported throughout this process of establishing this partnership, not least our international office.”

Jimmy said in April of 2018, he organised the first official trip by a VUB official in the person of his former supervisor who visited The Gambia to lecture in the school of arts and sciences, and held series of workshops including with the Writers’ Association of The Gambia.
“Fatou Jeng, the first female president of the UTG- Students’ Union also visited VUB and later in May I visited The Gambia together with Prof. Ann Peeters to sign the MoU. From therein we started receiving/experiencing more visits between the two institutions,” he added.

He said during the January visit the vice chancellor was accompanied by the Minister of Higher Education and a seminar on democratic transition and the role of higher education was organised for them at the VUB campus.
“We also had two visits by the VUB Student Council in November 2018 as well as in February 2019. These two visits were meant to assess possible areas of capacity building through a joint Erasmus Project on higher education,” he said.

Opportunities
Jimmy said the partnership is aimed at focusing on key interests to both parties.
“We aim at focusing on research – supporting the research arm of the UTG through teaching and exchanges, promoting and strengthening internationalisation quest between the two institutions and fund joint projects and grants such as Erasmus Grants/Projects on higher education,” he highlighted.

He said the partnership has already secured funding for eight students from the UTG, including an admin staff and two other lecturers for exchanges between the two universities.
“In March an admin staff from the UTG international relations office benefitted from this exchange and this coming September 2019 we will welcome six students to the VUB for a semester exchange. The same will happen in the upcoming year. Whiles VUB will send in two staff (a professor and an admin staff) to the UTG,” Mr Nzally disclosed.

Research Hub
On the areas of research, he said: “A research centre has been established at the UTG. The Hub will house the UTG e-library as a way to support the research venture/quest of the UTG. We have installed over four computer labs at the various UTG campuses. This way we are interested to support the capacity building as well as the infrastructural development of the UTG”.

“Giving the value our university places on internationalisation, we will officially start a joint summer school in January/February of 2020. So VUB students will visit for about a week or so. This visit will be educationally-oriented in which students will have firsthand interaction with the Gambian culture, attend classes at the UTG, make visits to historical sites, etc,” he explained.