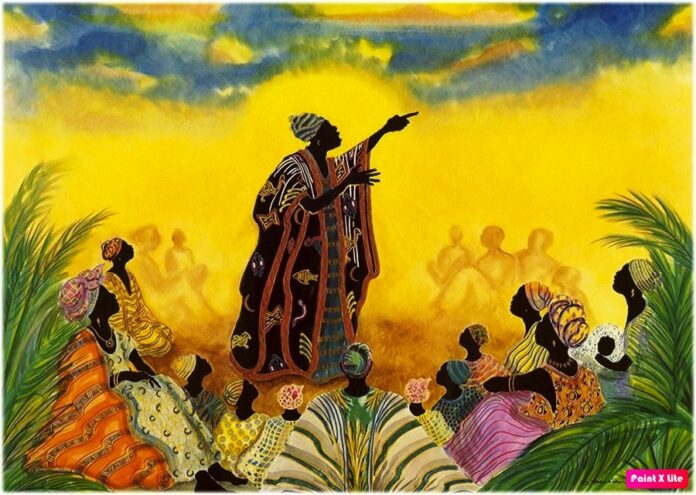 It was a cool and quiet Sunday afternoon. Amadou was sitting on a sofa at the living room with his beautiful wife, Musukoi. He has his right arm around her waist as they watched the Seyfo’s meeting with the Balang Kunda ward. Their three children, Buramanding, Faburama, and Dobally, were buried in their homework. He always spends Sundays with his family. Every other Sunday, he drives them to the coastal village of Fansoto where they first enjoy a long walk on the clean sandy beach before settling down at a quiet corner for a family picnic. Pertinent issues affecting the Kanbeng family are oftentimes openly discussed and crucial decisions made. Each view is heard and carefully looked into before it is discarded or taken on board. The Kanbeng family is very closely knitted.

Amadou smiled as he watched the Seyfo adjust his white grand mboub from left to right in agitation. His scary face was precipitating sweat pungently. He waved his pray beads threateningly to the enthralled crowd: “I know you do not like me. Well…Let me tell you this…in fact I don’t care whether you like me or not I am the Mansa of Kankary Kunda. For your information, I will be for the next upteen years. What will you do about it?”  The camera shifted from the Mansa and slowly cruised the crowd; paused and zoomed on the Kebba of Fansoto ward. He was calm and his face expressionless. “My jinno has just disclosed to me what your Kebba is currently thinking of. Do you want me to tell you what is in his mind? Dead silence engulfed the crowd. The excitement mutating into fear. Sensing the desolate mood of the crowd, he cranked, “Anyway, it is not important. However, I want to tell you this that as long as I am the Mansa of this land, you will not have anything from me…no water, electricity, roads and health centre. I will ensure that you remain poor and miserable for the rest of your lives or until you decide to love me more than yourselves.”  Musukoi looked into Amadou’s eyes and shook her head in disbelief. “How can a Mansa say such a thing to a people whom he has sworn to protect and care for?” She asked the love of her life. “Musukoi, if all the people of Kankary Kunda were like those of Fansoto the Mansa would have been history now. Unfortunately, the majority of our people are self-centred. They do not care about the welfare of all. They will do everything possible to keep the Mansa in power as long as he gives them rice, oil and meat once every five years”, lamented Amadou.

A loud knock on the door interrupted Amadou. Buramanding rushed to see who was at the door. Two uniformed police officers walked in. Without hesitation, the Sergeant blurted: “Amadou, you are under arrest”. He grabbed Amadou by the collar and pulled him up roughly reaching for the handcuffs on his side. The Corporal, who looked smarter and seasoned than his sergeant, leaned and whispered something to him. “Shut you mouth or I charge you for insubordination now now”, commanded the Sergeant in fury. “As I was, Sir!” saluted the Corporal before adding “But I don’t think it is proper to handcuff the gentleman in front of his children Serg since he is not resisting arrest. Besides, you are yet to inform him of the reason for his arrest and his rights, sir”. Sergeant Tolleh let go off Amadou and turned to face his corporal. “Corporal Silabali, Na you or me who be senior man here? Before he could respond, “Attention! And keep still”, ordered Sergeant Tolleh sternly. As the drama shifted towards the two officers, Musukoi sent the children to their rooms. She gazed into Amadou’s eyes, the look on her face oozing fear and confusion. For a moment, she thought she was dreaming. Her Amadou who cannot even kill a fly or reproach a person to commit a felon was beyond her comprehension. Tears began surging from her eyes. Images of her history with Amadou began to flash in her mind’s eye like a Grammy award Hollywood blockbuster movie.  The smiling and easy-going man who is always eager to please others to spend a night in a rotten cell with criminals ate up her heart. The thought of her beloved alone with this barbaric sergeant in a police station numbed her every nerve. The police are notoriously known for man-handling suspects. It is narrated that there were instances when some suspects were electrocuted, while others had their hands handcuffed, legs tied, a long log put across their hands, legs and then hung between two tables. These and other unconfirmed alleged tortures meted by police investigators on suspected accuse awakened the fighting spirit in Musukoi. “Oh hell, no!” she heard herself screamed sending Amadou and the officers in utter surprise.

“Whating na you say?” the startled sergeant asked turning brusquely to face the charming Musukoi. Sensing the determination of Musukoi to protect her beloved husband at all cost, the young corporal safe the occasion by assuring her that her husband will be treated with all the respect he deserves. “Your husband is a highly respected member of the society; consequently, as law enforcement officers, we cannot treat any less. It is just a routine process when we get orders from the top to carry them out. I can assure you that he will be home sooner than you expect”, Corporal Silabali further reassured Amadou’s beauty queen. “You better do or else you will have me to deal with”, gave in Musukoi.

At the Police Station, the smell of mixed odour of detainees and sweats of the officers filled it with a repelling obnoxious aura. Flies, litter and stains like an unfinished painting of a careless artist decorated the station’s walls, floor and furniture. The station officer followed Amadou’s eyes as they browsed his new environment. “Sorry, the cleaner called in sick today”, he apologized to Amadou. “I will not keep you here for long. We will go through the cautionary and questioning process as quickly as possible so that you can get back to your family”, consoled the officer. The station officer was a man with enviable moral and ethical character. He was feared and respected by most officers due to his firmness to uphold justice and the rule of law. In fact, it is narrated that he once fell out with the Mansa who ordered for his arrest and imprisonment. He was later released and reinstated but he remained just. After the usual obtaining of a witness statement from Amadou and all the other protocols, he had a private chat with him. “This is between you and me Amadou”, he murmured “our beloved country is sinking in chaos. Mansa should be very careful. It appears that he is not taking any advice these days and that is not good for a leader”. “But I don’t understand why you have to comply with an unlawful order”, Amadou countered. “Mansa cannot personally go and arrest, detain, torture and kill people. It is you who are helping him sink our country”, swiped Amadou. “My friend, you are missing the point. Can’t you smell the coffee?” demanded the officer. “If you fail to carry out his directive, you will disappear and never be seen again by your family. Some of us are in this mess but we hate it more than you will ever know”. After a long silence, Amadou said, “I understand”. “Thank you, Amadou, for understanding and keep up the good job you doing for the community. You may go now until I receive further instruction”.

At home with his family, Amadou cracked his head searching for answers of the mess in Kankary Kunda. Is it the Seyfo or the people who are the problem? He wondered. As if his perturbed wife was reading his mind, she interjected his hallucination, “What do you intend to do next?”