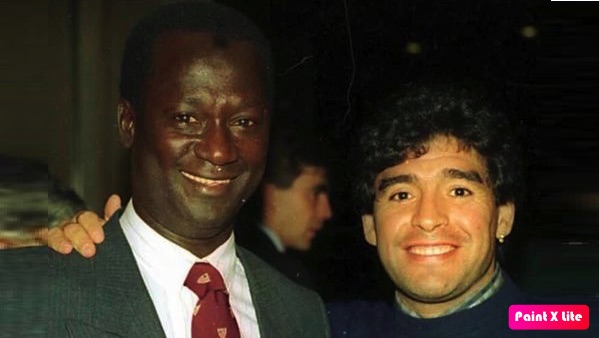 The late Gambian player Biri- Biri quickly endeared himself to the passionate crowds at the Estadio Ramón Sánchez Pizjuán at Seville FC in Spain between 1973-78 with his breath-taking skills and ability to turn a game. His greatest achievement came in his second year in Seville, when he was instrumental in helping the club gain promotion to the Primera liga. Biri was a cult-figure for the fans during his five years with Sevilla, and such was his legacy, that the largest organised supporters group in the Estadio Ramón Sánchez Pizjuán, Biris Norte 1905 are named in his honour.

Years after he left, another legend arrived in Seville, Diego Maradona. When the two met in 1994 at Seville Maradona hugged Biri and told him: “Since I came here, I kept being told about Biri Biri, and I want to let you know that I am convinced that you are greater than me.”  Biri might have thought that Maradona who won the World Cup, and was terrifically, famous globally, must have been flattering  him. But football writers on both players’ time at Seville said Maradona was being sincere and honest because unlike Biri’s golden times at the club, Maradona’s time in Andalusia is routinely described as forgettable and it is easy to see why a season which brought no silverware might be ignored. There was no glory here. As Maradona flew in he sang of Sevilla being champions. It was fantasy. The only title had come almost half a century ago. The club had not been in the top four for over 20 years.

Maradona was returning from a 15-month ban for using cocaine but he was only 31. There was time for another glorious chapter and he was being reunited with Carlos Bilardo, Sevilla’s coach and the man who had guided Argentina to that World Cup win in 1986.

This time it did not work out but only after a chaotic season in which Maradona endeared himself to his team-mates and infuriated his bosses. It was a tale of bullfighters and ball juggling, private detectives and public partying. And glimpses of that old Diego magic.