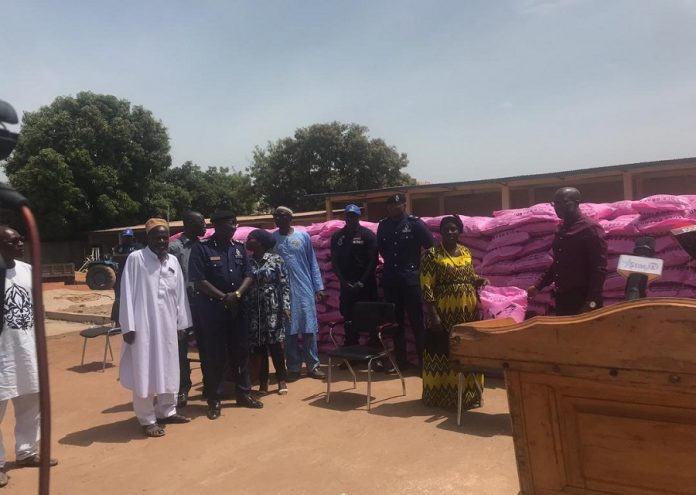 Kanifing Municipal Council (KMC) has used 1 million dalasis cut from their travel budget to fight againts COVID -19 pandemic in the country by donating four hundred bags of American rice 25kg to KM-based families at a presentation held at KMC annex in Kanifing.
According to officials, the donation is geared towards helping the vulnerable families within the municipality and also targeting over 10,000 bags of rice to be distributed.
Deputy Director of administration of KMC, Wurra Bah, said the presentation is to held the needy families within the KM.

Director of services KMC, Lamin Sanyang, said since the onset of COVID -19 in the country the council has implemented series of activities in order to fight against this deadly pandemic.

He said the second component is the preventive aspect of it, which involves installingalmost 500 hand-washing stations in the municipality with some detergents and other materials in order to sustain those stations.

“Today we are launching the third component which is economic or food burden relief. This initiative is as a result of the council cutting 1 million dalasis from its travel budget and other our private partners who have donated the council,” he said.

Chief Executive Officer of KMC, Sainabou Martin Sonko, said since the outbreak of COVID-19 KMC has been in the forefront ofthe fight against this deadly pandemic.
According to her, KM is the most densely populated municipality with all classes of people.
She further stated that, KMC has not forgotten and will not forget support received from individuals, businesses from Gambians and non-Gambians resident within the municipality since the outbreak of this deadly disease.

“We will especially acknowledge the Indian community, Africell, the Sarahulleh community, the Bankers’ Association and the Janneh family who contributeded emensely toward this initiative,” she highlighted.
She called on all Gambians and non-Gambians to join their efforts to fight against COVID-19.
Other speakers included Deputy Mayor Musa Bah.