Lack of storage, cooling facilities among major threats to agricultural production in NBR 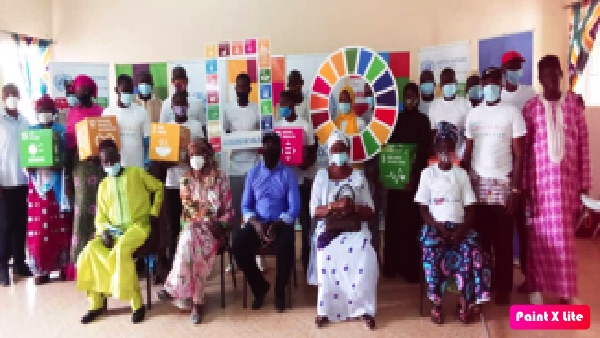 A day community consultation on the United Nations Common Country Analysis [CCA] in the North Bank Region has revealed that one of the most threatening factors of agricultural production in the region is the lack of storage and cooling facilities.

Held at Dembo Fula hall in Kerewan, participants also observed that increased land grabbing and poor health facilities and services are disturbing peace and security and social cohesion among people in the region. The gathering brought together children, women, youth, local authorities, farmers and persons with disability among others.

The activity was organized by the Gambia National Youth Council (NYC), Gambia Association of Local Government Authorities (GALGA), Office of the President Department of Strategic Policy and Delivery, Ministry of Finance and Economic Affairs, Ministry of Children, Women and Social Welfare/Women’s Bureau in partnership with the Office of the UN Resident Coordinator and other partners as part of events marking the 75th anniversary of the United Nations.

The Common Country Analysis [CCA] is an independent, impartial and collective assessment and analysis of a country situation used in developing the Cooperation Framework. It examines progress, gaps, opportunities and bottlenecks regarding a country’s commitment to achieving the 2030 Agenda, UN norms and standards.

The overall objective of the consultation was to bring together key stakeholders of the communities to discuss the current situation of the corona virus and how it impacts on development; conduct a robust inclusive gender sensitive stakeholder consultation to ensure ownership of the CCA and ultimately the CF; and engage a cross section of community representatives to determine the development priorities in the context of the UNHSTF and UN75 anniversary.

Introducing the background of the activity to the participants in Kerewan, Ms. Seraphina Wakana, UN Resident Coordinator said, “UN agencies in every country work under the leadership of the government. 2020 is the year of the UN as it turns 75.”

She said the current strategy ‘UN Development Assistant Framework in The Gambia [UNDAF]” will end next year 2021, and as a result they are now looking back on where they are, who they are, what they have accomplished and where need improvement.

Ms. Wakana added that through their principle of “leaving no one behind,” they are now preparing a new strategy for the next five years and hence the community stakeholders’ consultations.

According to the Resident Coordinator, the engagements will take advantage of the cross sectoral linkages of the UN system’s expertise and experience in the Gambia to develop interventions ensuring the effective localization of SDGs with the communities as the main focus.

She further stated that the UN focuses mostly on capacity building, advocacy and programmes implementation with their counterparts to address the needs and development challenges of the vulnerable communities.  “We want to build capacities when we implement our programmes,” she added.

Mr. Landing B Sanneh, Chairman of Mansakonko Area Council who also doubles as President of GALGA, recognized the important role and the valuable contributions the UN system in The Gambia are playing in national development.

“In the spirits of SDG17 partnerships, the consultations will add up to the inclusion progress for the SDGs to be achieved together.”

He reiterated partners’ willingness especially the local government councils and authorities to work with the UN partners toward localization and achieving the SDGs and national development programmes together.

According to Mr Sanneh, the consultations are expected to strengthen local governance structures to enhance their participation, ownership and sustainability of development support and to restore livelihoods of vulnerable women and youth and enhancing opportunities for self-reliance.

Speaking on behalf of the National Youth Council, Mr. Kawsu Sillah, Programme officer for peace, security and justice said the community consultations are organized through a mult-stakeholder partnership using the people centered approach in order to ensure no one is left behind. He thanked partners and participants for attending and reminded them to be conscious about sustainability of the community empowerment programmes in order to impact the lives of the beneficiaries.

Other speakers include Mr. Malamin IL Bojang, Chairman of Kerewan Area Council and Pa Modou Gaye, District youth chairperson who represented the Regional Youth Committee, who both expressed appreciation for the timely interventions of the UN system and local partners and assured of the continued partnership of their various constituencies in accelerating the decade of action for the implementation of the UN 2030 sustainable development agenda.