Cup of tea for Barrow; homosexuality

Dear Mr. President, your today’s cup of tea will be served with much sugar of seriousness and thoughtfulness. This is because the issue at hand, homosexuality, is very uncompromising and ill-considered. This ungodly act endorses same-sex marriage that will pave the path for men to make love with their fellow men and the same thing applies to women. This heinous and unforgivable act is a big stigma since it is against humanity. For that matter, all religious scriptures have frowned against it and made it forbidden. This gave drafters of our laws most especially the Criminal Code to criminalize homosexuality due to its illicit nature.

In light of above, we must realize that homosexuality is against good conscience, morality and righteousness, which are the core values of our nation and it can be destroyed by its legalization.
It is for that matter that the great naturalist, Saint Thomas Acquinas stated: “An unjust law is a human law that is not rooted in eternal law and natural law. Any law that uplifts human personality is just. Any law that degrades human personality is unjust.” This piece of statement illustrates clearly the correct rationale of many conscious states going against it and even putting in place punitive measures to deter people from messing up this beautiful world with unnatural acts. It’s because this unnatural act has brought stupidity, shame and destruction since they’re in the wrath of God.

Succinctly, these are words coming from the hearts of Gambians whose good conscience has never allowed homosexuality. Chiefly, we wouldn’t want to be doomed as the people of Lut; and we wouldn’t want to be woefully demoralized as Sodom and Gomorrah. Mr President, this issue should neither be entertained nor an area to contemplate – it’s just a no-go area. Gambians have huge faith in your government and legalizing this heinous act will be a slap on our faces. Therefore, we solicit your cogent, bold and sincere reaction to say a big no to homosexuality because it’s incompatible to the human lives and a filth on the race of humanity.

The fight against corruption

The ugly happenings being exposed at the Department of Immigrations is just a tip of the iceberg, as it were. The Deputy Director General, Mr Seedy Touray should indeed be commended if the reports emanating from Immigration are true. It is high time we started rewarding and commending whistleblowers if we indeed want to control and minimize corruption and other forms of evil in our country.

As I said earlier, this problem is not only at the Immigration Department but in almost all other departments in the country. Last week, I saw an old woman who complained that if one is poor in this country now, one will not receive medical care. She said for some reason, she was told by a doctor that she couldn’t be treated on that day. On her way out, someone told her that she had to give something to the doctor, so she could be treated. She did; and lo and behold! She received the check up she was looking for.

Whether that is an isolated case or symbolic of trends at the hospitals, it is scary and a cause for concern. If, even in our hospitals, that kind of thing can happen, then it is indeed a very serious matter which needs our urgent attention. Another department that is said to be rife with corruption is the Gambia Revenue Authority. Many in the population believe that corruption is the order of the day at the GRA. Similarly, there is talk that there is corruption at the National Environmental Agency as that is the only way the renewing of the license of the Chinese company, Golden Lead Factory can be explained considering the environmental hazards it had been shown to cause.

A few weeks ago, we saw the Gambia Police Force/Service come up with a billboard which seeks to reduce corruption. This in a way is an admission that there is some form of corruption going on in that department as well. And naturally, it will not be farfetched to say that corruption is in every other department or ministry or even the presidency given its prevalence in all the above sectors.

The fight against corruption is a difficult one and will take the efforts of the entire nation to have an impact. Firstly though, we need leadership in that area. The Office of the President must come out strongly and speak against corrupt practices in the country. It should be condemned in the strongest possible terms and a message sent that it will not be tolerated from anyone, no matter who.
The general public must also assist in this area. Do not bribe anyone or seek to solicit undue favors from public officials. Do the right thing and whatever service you are demanding, pay the right amount if it is a service that needs to be paid for. And once you pay the right amount, insist on being given an official receipt so that the money will go to the right place.

The media has an important role to play in this. As it is, the conducive environment for the media to play its role is there and as such the journalists must up their game and conduct research; they must engage in investigative journalism. They should follow the money and track down every butut and inform the public. This can have a good impact on the fight against corruption.

Finally, the President should constitute an Anti-Corruption Commission that will become the face of this fight. This will galvanize the efforts of all by bringing the fight under one umbrella. This will give whistleblowers the courage to channel their information, so action can be taken. The last stage in this link of the fight is the judiciary. People found wanting must be prosecuted and face the full force of the law. That will be the only deterrent.

Dear editor, Since a lot of people are liking, doing or saying this or that thing, then it must be right or a very good...
Read more
Letters

Dear Editor, It is about time that the people of The Gambia start listening to statements by Honourable Sidia Jatta and Honourable Halifa Sallah of...
Read more
Letters

Dear Editor, The Association of Gambian Students in Turkey (AGAST) wishes to draw the attention of the Gambian public to the presence of persons who...
Read more
- Advertisment - 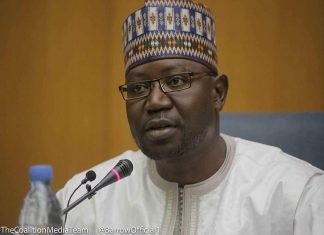 March 5, 2021
By Omar Bah The Gambia Moral Congress leader has called for a political funding bill that will compel political parties to appear before the National...