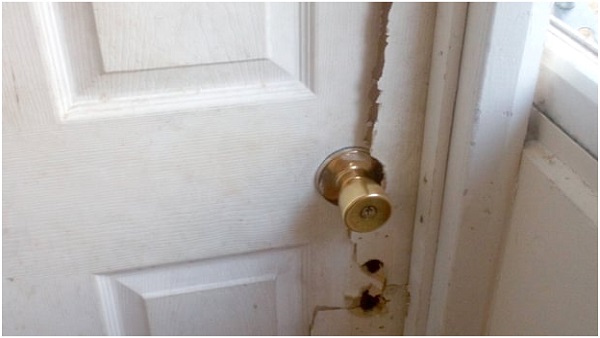 A Home Office contractor has smashed a door to asylum seeker accommodation to allow an asylum seeker with an active case back into her room after locking her out just hours before.

The Home Office U-turn came after the Guardian highlighted that the locks to the asylum seeker’s room had been changed.

Earlier on Thursday a contractor arrived at the Home Office accommodation in west London. He informed the asylum seeker that she was being evicted and said: “When you’re asked to leave this country you have to leave.”

The woman, 46, who fled The Gambia after refusing to carry out female genital mutilation (FGM) on youngsters, has an active asylum claim.

She said her life would be at risk if she were forced to return to the West African country because she defied her community.

The asylum seeker, who did not want to be named because of fears for her safety, contacted the Guardian when the housing manager arrived without warning on Thursday afternoon.

He informed her that he was going to change the lock on her bedroom door because she was being evicted.

The woman was not permitted to gather belongings, and her vital medication, legal documents and possessions remained in the room.

The accommodation in Hounslow, west London, houses single women and women with children. The Guardian has previously exposed the poor conditions at the premises.

Many of the children living in the property witnessed the lock-changing incident. They, along with the adults, could be heard screaming and crying when the manager began to change the locks.

The woman tried to tell the manager that her asylum claim was ongoing so she could not be evicted. Home Office rules state that people with active claims are entitled to accommodation and a small amount of financial support.

She told the Guardian that she was overjoyed that she would not now be forced on to the streets and could get back into her bedroom.

“I am so relieved that the Home Office reversed their decision and I’m happy to get back into my room,” she said. “But the housing manager who came round to the accommodation to reverse the lock change had to smash the door to let me back into my room.

He said they will have to replace the broken door.”

The women in the house said they operate as one family. Another resident told the Guardian.

“We were all so upset when they came and changed the locks on this lady’s door and told her she had to leave.

All the children were crying.

Now the Home Office has changed their minds we are all so happy.”

The 46-year-old had recently received a letter informing her that the Home Office was planning to evict her but she had the right of appeal.

The woman lodged an appeal, which is due to be heard next week. While an appeal is under way she cannot be evicted.

“I called the courts and tribunal service, and a member of staff spoke to the housing manager to confirm that I have an appeal hearing next week but he did not listen and went ahead with the lock change,” she said.

The incident had caused her and the other women and children in the house deep distress, she added.

Lock changes at asylum seeker accommodation in Scotland have proved controversial but until now there have been no reports of similar occurrences in England or Wales.

Courts in Scotland have ruled in favour of the practice.

Serco announced plans last July to evict 300 asylum seekers who have been told they could not stay in the UK, but put the plans on hold following cross-party and cross-sector condemnation.

Govan Law Centre lodged a legal challenge to the lock-change procedures, which the company described as its “move on protocol”, but lost when Scotland’s highest court, the court of session, ruled in April that it was not illegal.

A Home Office spokesperson said: “It would be inappropriate to comment while legal proceedings are ongoing.”