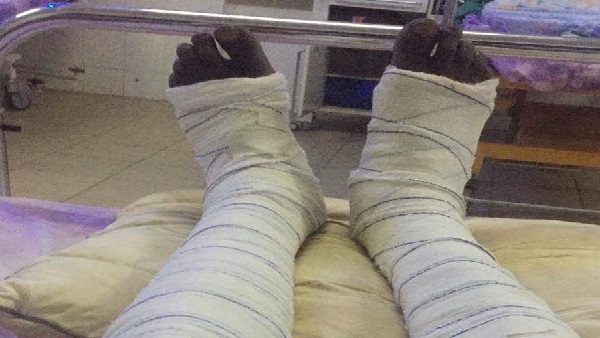 A Brusubi resident, who jumped from the roof of a two-storey apartment breaking both legs as he tried to escape arrest, has been explaining his ordeal to The Standard.
Salifu Bittaye claimed he suffered five hours of detention pain without medical attention.
Bittaye, who is currently admitted at the Edward Francis Small Teaching Hospital told The Standard from his sick bed that his ordeal started when a woman came to him looking for a room to rent.

“I told her one of my tenants was planning to leave the house end of month if she could wait which she agreed and gave me D9,000 advance payment for the house,” Bittaye explained.

He further revealed that the woman took a long time before returning during which time he spent her advance money and let the house to some else. “When she came and discovered that I have given the house to someone else, she reported me to the police and when we arrived at the station, the police asked me whether I could provide her with another house and I said yes. But the woman insisted that she needed her money back which I did not have it at that time,” Bittaye said.

He said he was kept at the station for several nights before being granted bail.
Bittaye further alleged that the same woman came with two Nigerian men to his house and beat him up seriously before taking him back to the Brusubi police.
He said the police came for him so many times that on the last occasion, he decided that he would not make himself available for arrest and would hide for his safety since he did not understand what sort of arrangement the woman had made with the police that warranted his frequent arrest.

“During their last visit, I heard my nephew telling them that I was not around but they insisted they will break into my house. So I was so afraid that I decided to jump from the storey building,” he said.
Bittaye broke both legs from the fall and he said that did not stop the police from taking him to the Brusubi station where he was kept “for well over five hours” before being taken to Sukuta hospital, and then to Serekunda hospital.

“What was so sad is that when we arrived at Serekunda hospital, the doctors reported that their X-ray machine was out of order and requested the police to take me to a private hospital for an X-ray but the police refused and instead took me back to the cell with my broken legs. I stayed in that horrible pain for 24 hours. It was my sister who came to bail me and took me to Ahmadiyya Hospital and then to EFSTH,” he added.

He said the doctors at the Banjul hospital recommended for him to undergo further operation but they didn’t give them specific date.
“They said we should buy some metal plates, but unfortunately when we called the only suppliers of the metal plate in the country, they said they don’t have the kind of metal we are looking for and frankly as we speak, we don’t have a single butut. We even struggle to buy food. I can’t sleep at night due to stress,” he said.

Bitttaye said he does not understand how he could be subjected to such a treatment.
“This really worried me because I did not kill anyone. Why are they treating me as if I had killed someone?” he explained.

He said Dr Marena, the only bone specialist in The Gambia, has recommended him to go for overseas treatment.
Contacted for reaction, the police PRO ASP Lamin Njie promised to find out and get back to us.
However, after several attempts to reach him, he didn’t pick his phone.