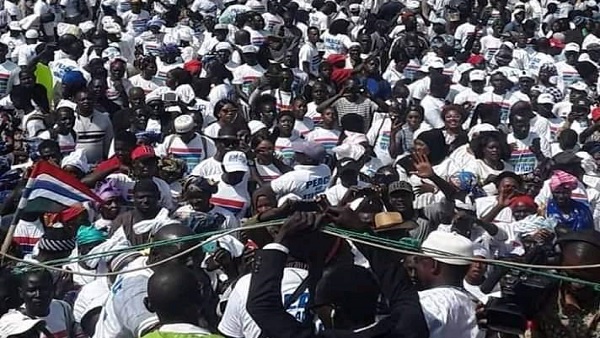 The Gambia for 5 Years backed by tens of thousands of people yesterday marched to the Denton Bridge to present a petition to President Barrow, urging him never to give in to the demand of the 3 Years Jotna group, who last month protested for the president to quit as promised during his election campaign.

Trooping the same distance covered by the Jotna group last month, the protesters said they have succeeded in mobilizing larger counter balance to the Jotna group and will not relent until the opposing side realises that what they are calling for is unconstitutional. ”It is like comparing tradition to Shariah. Who would allow traditional or cultural practice to take precedence over Shariah?” asked Dou Sano, presidential political aide alluding to the Constitution and the Coalition MoU.

Sano told journalists that there were no party colours or interest at the event. “It was purely to defend the constitution of the Gambia which stipulates that an elected president should serve for years. We don’t need to over elaborate this point. Today the masses have turned up to show the world that we will defend the constitution of the Gambia. This is not about Adama Barrow. It is about defending the law of the land,” Sano stressed.
Elsewhere along the route, people hoisted banners reading ‘the constitution is supreme’ while others shouted ‘Barrow for ten years and 20 years’.

Gibril Bah from West Coast Region told The Standard that the people who want Barrow to step down are simply not reasonable or motivated by jealousy. “The difference between 3 and 5 years is just too little, why can’t this stubborn lot just give chance to peace and wait for matter of just 24 months to show their protest at the ballot box? What gain will be made by causing unnecessary fear and confusion when elections are just at the corner?” he asked.

Sulayman Ceesay from Tallinding, who was found sitting on a mat in the crowd said the 3 Years Jotna have caused so much unnecessary trouble and noise that people started to think that Gambia was more peaceful under Jammeh. ”It’s hard to believe. No one is disappearing now, or taken to bush to be strangulated. No one is being tortured or illegally detained or sacked. And these are the things we fought to achieve. I have said it since at the Coalition convention. Anyone of the Coalition leaders is better than Jammeh. I still believe that. So let us stick with Adama Barrow until when God gives us another one,” Ceesay said.

Meanwhile the Group wrapped up the long day with a petition to Barrow which is produced here in full:
“The Gambia For Five (5) Years and Peace Building in collaboration with their partners such as the Peace and Stability group wish to petition you to complete the five(5) year presidential term mandated by the 1997 Constitution of The Gambia. This patriotic move is prompted by the three (3) Years Jotna Movement’s campaign for you to step down before the 19th day of January, 2020 thereby holding you accountable to the 2016 Coalition Agreement.

Section (65) of the 1997 Constitution of The Gambia which is an entrenched clause provides that an elected President of the Republic shall serve for a term of five years. This provision supersedes the 2016 Coalition Agreement. It is common knowledge that the said Agreement has been amended from three (3) to five (5) years aligning it with the dictates of constitution.

It is our fervent believe that the three (3) Years Jotna Movement’s recent protest and petition calling for you to step down and the threat for another mass protest on the 20th January 2020 is unconstitutional.

Economic activities in the country are dwindling, as fear is mounting in all corners that the anticipated protest of the 20th January, 2020 may lead to civil strife and instability in the country. We therefore call on your Government to take firm steps with a view to ameliorating the negative effects of three (3) years Jotna Movement’s scare-mongering tactics. Majority of Gambians are behind you and advocates for peace and stability and would not sit aside and watch the said group send the country down the drains.
We wish to humbly remind your Excellency that you have taken a solemn oath to protect and uphold the Constitution of The Gambia. Serving the mandated term of five (5) years is a manifestation of upholding and protecting the constitution. We the majority of Gambians expect you to do just that.

Finally, we wish to stress that if you shall ever yield to the demands of Three (3) years Jotna, you will be betraying us the majority of Gambians and we shall hold you accountable for failing to protect and uphold the constitution. We will not relent in our stride and shall embark on mass protest until the will of the people is respected.

Please find enclosed herein a list of names and signatures of persons in support of this petition. We have targeted to get only 15,000 (Fifteen Thousand) signatories in support of the petition but as you can see our list as gone above D20, 000 (Twenty Thousand) representing a fraction of a percentage of the people who attended today’s protest.
Signed by
……………………………
Ebrima Sorrie Bah
Secretary General”