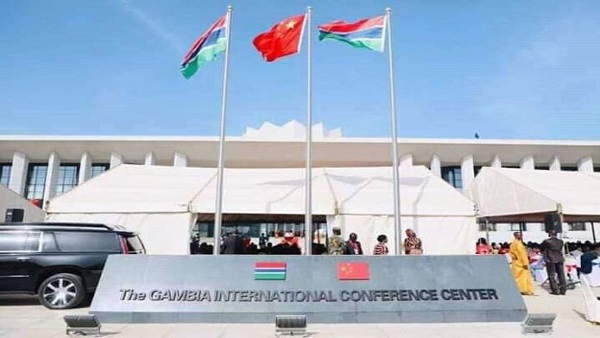 President Adama Barrow has described the Sir Dawda Kairaba Jawara International Conference Centre as one of its kind in the region because of its
uniquely appealing design and the construction techniques that make it so elegant.
The president, who inaugurated the Chinese grant fifty million US Dollar (US$ 50 Million) complex at Bijilo Saturday, further disclosed that the fourteen thousand square-metre floor, with a sitting capacity conference hall of over one thousand persons, gives the Centre the edge to host major international meetings.

“The Government opts for an operational management and maintenance mechanism system that guarantees its optimal financial sustainability and proper upkeep. Such option is to subject it to a facility management model that best provides such safeguards and I am hopeful that the Centre will give The Gambia the opportunity to attract and host meetings, incentive travels, conventions, conferences and exhibitions,” the president said.

Barrow added also that besides creating avenues for important decision makers to visit The Gambia, the Centre will provide opportunities for employment, open up the tourism industry market, enhance transport services and expose our diversity and culture to the world. “Against this backdrop, we are profoundly grateful to the People’s Republic of China for their support to The Gambia and, generally, for leading an unprecedented alliance to pursue ‘the Belt and Road’ initiative aimed at establishing the longest trade route in the world,” the president.

The Centre, which is the first among many projects lined for the Gambia’s hosting of the 2022 OIC summit, took about two years to build by the Chinese construction team and a large team of Gambian experts who were praised by works minister Bai Lamin Jobe for their diligence and hard work. The minister said the project employed over 1000 people including 500 permanent jobs.

The Chinese Ambassador to The Gambia, Ma Jianchun said the complex is one among more projects funded by China in The Gambia adding that the 80 million dollar road and bridge projects in the URR will also be completed soon.

The ceremony also heard from the family of the late President Sir Dawda Jawara led by Ajaratou Lady Chilel Jawara. They thanked President Barrow and the Gambia government for naming the center after Sir Dawda, who died last August aged 95.