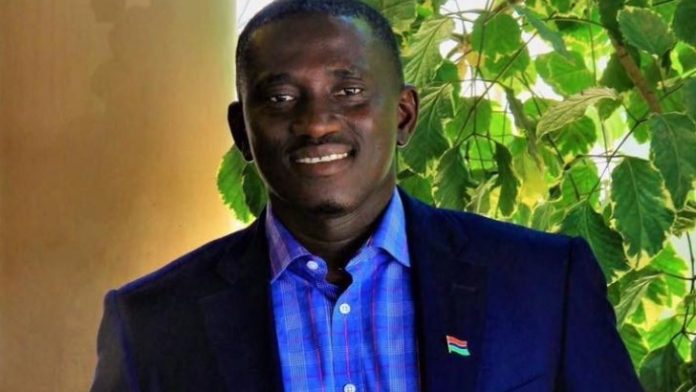 You are on it again. You always bring up non-issues to become issues and in the end expose your intellectual bankruptcy. How dare you attempt to drag the Gambia government and people into your pettiness?

If the EU ambassador expresses his opinion why do you think it is important for the people to react to it? Individuals can react like you have been doing.
As a law student, I think you have once more exposed your intellectual impoverishment. How can you say the government’s silence means they consented to the ambassador’s statement?

Consent to what? How can the government consent to a thing that is already criminalised? The government lacks the power to consent to an illegal thing, unless you don’t know. The word consent was wrongly used repeatedly when you were being interviewed. Our laws are here and the government’s powers and actions are circumscribed by law. Gambian laws criminalise homosexuality. If you believe in the rule of law, as you always pretend to be, why would anyone or the government express any consent regarding such matter?

Mr Sabally, you erred in your argument and you need to fix it. Failure to react to a matter that is already in the laws of the country cannot make a government culpable by not stating an opinion. Law is more powerful than opinion. Maybe you don’t know what consent means. To accuse the government or political parties of consenting to what the EU ambassador is saying when the laws of the country are already clear on such matter makes no sense. Please, don’t mislead the people.

The government has not made any attempts to legalise it in the country. The society is guided by laws. There is no petition before the National Assembly from any person or group calling for the decriminalisation of homosexuality in the Gambia. What then is the issue?
What the EU ambassador stated was his opinion and his opinion cannot be imposed on us. You have failed to realise that the EU ambassador was expressing his opinion. He is a representative of the European Union in the country and when he talks, he speaks their language and promotes their agenda.

Don’t you think you need to do a rethink on how you engage the government and people? Every day you are losing credibility.
Take your time and read these sections of our laws to at least acquaint yourself with the law. They are all provisions of the criminal code.
Section 144 criminalises carnal knowledge “against the order of nature” with a penalty of up to 14 years imprisonment. Sexual acts are criminalised both between men and between women under this provision.

Section 144(a) makes provision for the offence of “aggravated homosexuality”, which enumerates various aggravating circumstances, including where the offender is “living with HIV Aids” or a “serial offender”, punishable with life imprisonment.
Section 147(1) criminalises acts of “gross indecency” between males, defined as “any homosexual act”, or the procurement or attempted procurement thereof, with a penalty of five years imprisonment.

Section 147(2), introduced through the Criminal Code (Amendment) Act 2005, criminalises acts of “gross indecency” between females, defined as “any homosexual act”, or the procurement or attempted procurement thereof, with a penalty of five years imprisonment.
Section 167, following amendment in 2013, criminalises any man who dresses in the fashion of a woman in a public place with a penalty of up to five years imprisonment and a possible fine.

Don’t try to drag Gambians into petty talks. We have better things to discuss. Our laws are certain on the issue and whatever people say about it is their opinion. Whatever campaign or debate we do about it does not change the fact that the practice is criminal in The Gambia. You cannot call on our government to react to a non-issue.Thank you.
Yankuba Jallow is a final year student at the Faculty of Law,University of The Gambia. He is also a reporter for Foroyaa newspaper. WhatsApp: +2207151985 Emails: [email protected] or [email protected]