NAATIP holds awareness forum on trafficking in persons at Nemasu 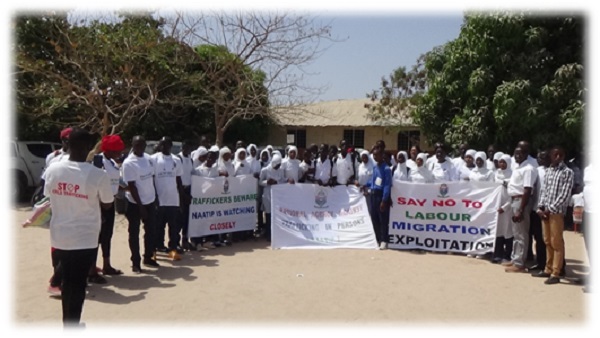 The National Agency Against Trafficking in Persons (NAATIP) on Monday 16th March 2020 conducted sensitisation on trafficking in persons at Nemasu Senior Secondary School and the local community.

The Executive Director Mrs Tulai Jawara-Ceesay briefed the gathering that NAATIP is under the purview of Ministry of Justice, and is responsible for combating trafficking in persons.
She informed the meeting that the delegation recently embarked on an awareness creation on Trafficking in Persons to St Joseph’s and Gambia Senior Secondary schools.
The principal objective of the awareness creation forum was to sensitize students and staff on the impact of trafficking in persons.

She said trafficking in persons is a global concern in which young people are vulnerable, most especially children. She explained the four P’s approach to human trafficking namely Prevention, Protection, Prosecution and Partnership.

She briefed the forum on the international definition of Trafficking In Persons in line with the Palermo protocol. She explained and mentioned that an overwhelming majority of victims of trafficking in persons are youth and also women paying the bigger price since the primary objective are commercial sexual exploitation and international labour migration exploitation which are the most common forms. She took the audience through the various case scenarios whereas a sponsor will appear to sponsor a girl child for local and overseas studies but the end result becomes exploitation and deception which was the offender’s intention.

Hamidou Jallow of CSCTS explained that the problem of Gambians is the culture of silence and stigmatization. He later discussed issues many people are surrounded with especially close relatives who can be the greatest enemies in terms of facilitating one’s journey starting with recruitment, transfer, transportation, deception to be able to habour and receive any victim at any destination regardless of the means involved.
He said in most cases the end result is always exploitation. He ended by saying young females are the most vulnerable to be trafficked.

Omar Bojang, who serves as the manager of Bakoteh Shelter stated that the shelter is a temporary home for victims of sexual abuse, victims of trafficking, missing children, early marriage and children on the move. The Management at the shelter reaches out to the community as good practice of preventing such cases to happen in the near future.
He said with the smartness of traffickers, they always deceive one from his/her family to exploit as an end result. He advised the students to be conscious of where they go and who they associate with. He cited an example of a child who is 12 years old, presently housed at the shelter breastfeeding a baby of her own.

Mbara Saine from MoBSE expressed gratitude to NAATIP’s approach in sensitizing and visiting schools which marks as a curriculum of its own and put emphasis that charity begins at home and no parent should take advantage to give away his/ her daughter for marriage below 18. 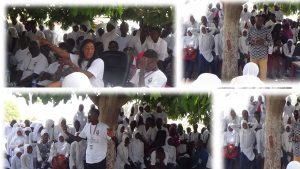 He said the chastity of a girl is not for sale, adding that the Convention on the Rights and Welfare of the Child protects children from hazardous work in any environment.
The team from NAATIP also discussed with the chef de garage, drivers, market vendors, passengers and some village elders about human trafficking.
Various speakers talked about the ills, dangers and consequences of TIPs, with emphasis on the role of drivers during the process.