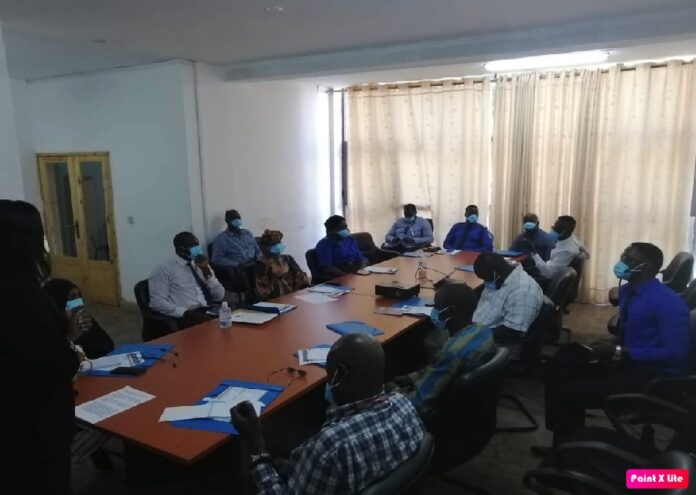 The National Agency Against Trafficking in Persons (NAATIP) conducted a training for law enforcement officers on how to handle cases involving trafficking and smuggling.

The officers were drawn from immgration, police, anti crime, etc, holding the training in Banjul at the Ministry of Justice.

According to director Jawara Ceesay, The Gambia is complying with its international obligations and has signed the Palermo Protocol to prevent suppression and punish trafficking in persons especially women and children.

“There is internal and external trafficking and because of its transnational nature, TIP is a cross border crime. Gambia has been upgraded to tier 2 watchlist in the recently released TIP Report 2020 but there remains a lot of work to be done by the law enforcement officers to properly identify the problems and punish offenders. We call on all stakeholders to tackle this menace,” she urged.

Yusupha Sanyang, information and communications officer, talked about how to identify a victim of trafficking in persons.

“Anyone/survivor (adult/child) who is recruited, transported, transferred, harboured or received and induced into labour or commercial sex through deception, or coercion,” he mentioned.

? the purpose (why it is done)

?the target (whom it is done to)

Sanyang added that victims of trafficking can be found in labour fields, markets, restaurants, bars, hotels.

Also speaking, Naffie Sissoho, Senior State Counsel, said trafficking in persons has become a major concern for all countries in West Africa, particularly The Gambia. The number of trafficking in persons cases are on the raise in The Gambia but if all stakeholders are on alert and understand the framework of TIP and what it entails, the number would drop significantly, she said. It is believed that when all institutions join hands and work together,there is a high possibility of securing conviction for TIP cases.

She further mentioned that the consent of victims of trafficking in persons to the intended exploitation shall be irrelevant, where any of the means for exploitation have been used.

Bafo Jeng, one of the senior state counsels, also spoke on the penalties faced by the perpetrators.

?A person who committed an offence under this section is liable on conviction to a fine of not less than D50,000 and not exceeding D500,000 in addition to imprisonment for a minimum of 15 years and maximum of life imprisonment

?when the trafficking includes rape or death of a victim, or the victim is a child, the offender is liable to the fine as above in addition to life imprisonment.