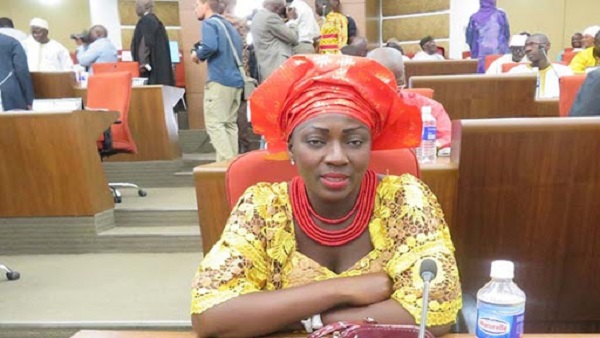 The National Assembly Member for Tallinding has recommended the imposition of harsh penalties for people bent on character assassination and smear-campaign through the media.

Fatoumatta Jawara made this recommendation on Thursday at the National Assembly where lawmakers adopted the Assembly’s select committee report on the Access to Information Bill for consideration.
The bill, if passed, could see infringements punishable with fine of up to D250,000 or two years in prison.

But for NAM Jawara, this punitive measure is lenient and would not deter people who use the media to maliciously damage the reputation and social standing of others.
Herself a victim of an abusive and sustained social media blitz following her attack against the person of the UDP leader Ousainu Darboe last year, Fatoumata Jawara contended: “We are not against journalists but those assassinating people’s character. If you lose money, you can get it again but if you lose your image, your [good] reputation it cannot be replaced. If you lose your [good] image, you are nothing. This is why it will be important for the deputies to look at how they can make the penalties for people using the media to assassinate the character of others severe so as to deter others.”

Meanwhile, the passing of the Access To Information Bill has come closer following its adoption yesterday by legislators for consideration. Before its adoption, lawmakers however made some observations bordering on the guardianship of the bill, its autonomy, the punitive aspect among others.

It was recommended by the select committee that the bill be under the custody of the Minister of Justice and a subsequent commission for the media be operated under the National Human Rights Commission. These recommendations generated some disapproval from some lawmakers, who said, for the media commission to be effective it must be autonomous.

The chairman of the select committee, Alagie Mbowe of Upper Saloum, was quick to explain that setting up a separate commission would be both revenue and time consuming and, therefore, only ideal that the media commission operates under the NHRC.