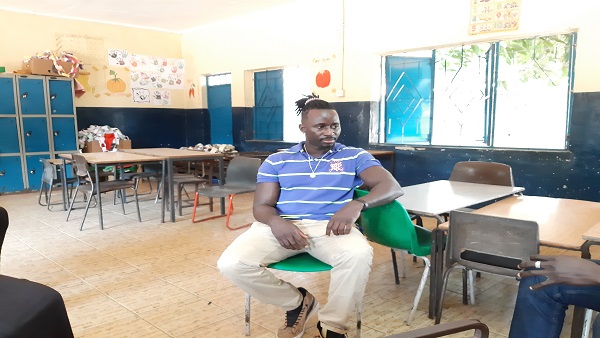 When American film actor Robin Williams, who suffered from depression, committed suicide two years ago, Kenyan humorist writer Ted Malanda feigned incredulity said he can’t wrap his mind around the fact that depression is an illness.

“In fact, it is such a non-issue that African languages never bothered to create a word for it,” he wrote in his newspaper under the headline “How Depression Has Never Been an African Disease.”

A Swedish based NGO ‘Love by Force’ owned by a Gambian national has begun to break that barrier in The Gambia.
The NGO focuses mainly on supporting people suffering from mental disorders. Experts say cultural beliefs, religious doctrine and family pressure surrounding mental illness can leave many people reluctant to talk about their mental health problems.

It’s a cycle that’s tough to break – and one that can have dire implications when people with mental illness feel too ashamed to seek out treatment. “The consequences are all around us of people not getting the help they need,” a senior medical expert said. So who do you call for help when you’re not supposed to say you have a problem? It’s a dilemma faced by people struggling with mental illness every day.

However, “Love by Force which started operating in the West African country two years ago is hoping to bridge these barriers by working closely with the families of those suffering from mental disorders to raise awareness of the disease.

Psychiatry remains an under developed area of health across most of West Africa. In the Gambia, for example there is only one psychiatric hospital for the whole country, which means around 100 beds per two million inhabitants.

The first hospital was opened in the 1960s in Banjul in a building that was previously a jail. Conditions were so poor that in 2009 the hospital was moved to the outskirts of the city to a new building financed by a Dutch NGO.

Today, the workers of the Tanka-Tanka hospital try to offer the best care possible in a country where traditional medicine rather than hospitals are used to tackle mental health problems.

Love by Force started with the Methodist Special School. As their pilot project Pa Modou Badjie, the founder had this to say: “We started ‘love by force’ in 2018 when we relealized that people suffering from mental disorders need extra attention but because of their condition they are usually left alone. We decided to start investing to support them
“What we do is try to put these people back into society. We try to make them feel important and valuable as opposed to how people view them,” he added. “We do this through awareness creation within the society to encourage them to accept these people.
He said when they visited the Methodist Special School; they realized that there is lot of children in need of different attention.

“Initially we wanted to support them individually with their families but we later realized that it might not be possible given the number of people who will need assistance. This is why we decided to go ahead with creating awareness within the society so that they will see these people as important members of society,” he added.

Before establishing ‘love by force’ he and his friend Daddy Jallow who is also the program coordinator used to help needy Gambian children with clothing and other stuff. The organization since its establishment also support people with disabilities, as well as work with youth on issues of sexual violence “
According to the program coordinator the organization had organized a program on Christmas Eve to create awareness on mental health and the need to embrace those suffering with the disorder. “We believe that if they are given the opportunity, they can live meaningful lives in the society. “We are of the belief that nobody is useless in society, it just depends on how we treat each other especially during difficult times, and”We must not fail the people who need us.”

The head mistress of Methodist Special school thanked the organization for choosing their school. As their pilot project she alluded that though the government gives them support “we still need support in other areas, especially in awareness creation within the society.”
“Sometimes parents get very much frustrated because their neighbors’ children are different from their children. But this is all due to ignorance,”