‘I had no business relations with Jammeh’

Business mogul Amadou Samba continued his testimony at the Janneh Commission yesterday refuting claims that he was a close business associate of Jammeh.
Samba stressed that he never had any business relations with Jammeh. ”If you get involved in business with Jammeh, he will use all the money and send you to jail; our relation was only based on friendship,” he said.
He said Jammeh found him already in a successful business from which he would borrow money that he never returned and when asked about it, Jammeh would create problem.

Samba said he had never participated in the negotiation for the sale of Gamveg Oil Company neither was he involved in the financial transaction or the management of the company.
He said he only got involved when a contract was brought to him, noting that he was kept in the dark and described his signature as a “rubber stamp.”

He said Jammeh’s decisions were unchallengeable, saying that
his signature is not on the work-about resolution of SSHFC on the loan agreement of $2.7 million. He said he was against the agreement but he had no veto power despite being the chairman of the corporation.
He claimed that he had advised the managing director of the Corporation to return the loan otherwise they will find themselves in prison.

On the sales of Kairaba Beach Hotel by Jammeh, Mr Samba said he was the chairman of the board when the hotel was bought by MA Kharafi and Sons and the evidence given by MA Kharafi’s country coordinator was all concocted because he did not sign any agreement, rather it was signed by Edward Gomez.
He said when the hotel went into liquidation, he was given an offer including Sun Beach Hotel but he said he needed a joint venture in Sun Beach Hotel and they decided to buy at a tune of $11 million.
Mr Samba informed the commissioners that his role as chairman in many companies and institutions were symbolic because there was never a board meeting.

He disclosed that the Millennium Investment Company belongs to Jammeh as well as Kairaba Beach Hotel.
On the acquisition of Kairaba Beach Hotel by Jammeh, Samba said he had never sat with the former president after the acquisition of the hotel as he was appointed by the late Baba Jobe but never played any role in the negotiation of the said hotel neither had he any discussion with Momodou Lamin Sonko, Coordinator of MA Kharafi.

He said he never had any business relationship with Jammeh and it was Jammeh who proposed to do business with him after he fell out with the late Baba Jobe but it never materialized. He said he is neither a shareholder of Jammeh’s companies nor signatory to any of his accounts.
Responding to Commissioner Bai Mass Saine, Mr Samba said Jammeh had never given him any money in a form of bank transfer and all the allegations against him were made by his enemies to assassinate his character.

He however acknowledged that as a businessman he was supporting Jammeh’s APRC party financially but he never involved in business or politics with him.
Meanwhile the Mayor of Kanifing Municipal Council, Yankuba Colley was spotted at the Commission.
Sittings continue today.

Former president of the Gambia Supreme Islamic Council, Alhaji Banding Drammeh of Brikama has passed away last evening. Sheikh Banding Drammeh was one of the...
Read more
News

Grandmother in trouble over FGM

By Alagie Manneh A two-year-old girl from Somita village in Foni Brefet was recently subjected to female circumcision despite a 2015 law banning the practice. According...
Read more
News

By Amadou Jadama Police prosecutors have filed a fresh charge against a convicted prisoner who escaped from custody while serving a five-year jail term at...
Read more
- Advertisment - 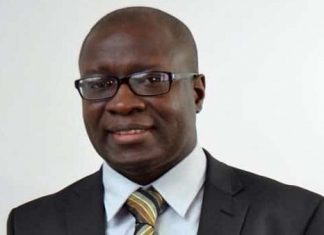 July 3, 2020
With Alagie Manneh The Standard: You were born and raised in the sprawling coastal town of Gunjur, what were the circumstances of your childhood and...

Grandmother in trouble over FGM