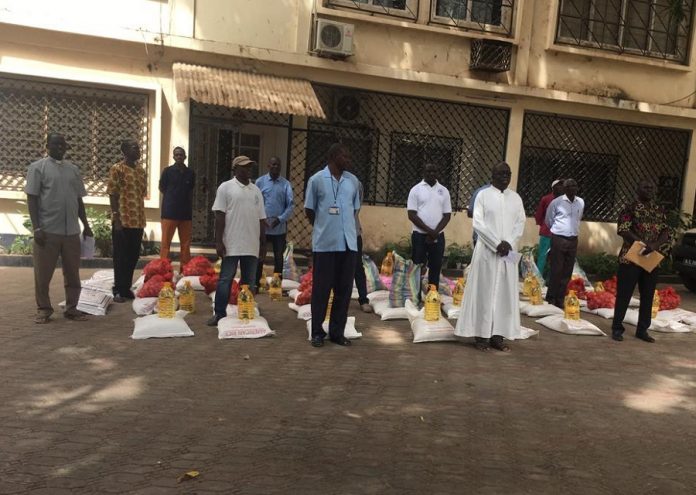 The Organization of Catholic Men for Development (OCMD) over the weekend donated food items worth fifty thousand dalasis (50,000) to some communities in the West Coast Region and Kanifing Municipality, held at the Catholic Secretariat premises in Westfield .
The gesture includes 46 [25kg] bag of rice, 24 gallons [5 litters] cooking oil and 24 half bags of onions. It aims to mitigate the hardship of COVID-19 to the people as many are affected economically.

OCMD was established in 2012. It comprises about thirty young professionals drawn from all Parishes within the Greater Banjul Area. It aims to contribute both financially and materially in the development of Catholic Church in the country. This organization renders assistance for many churches over the past years.

In his presentation statement, Paul C. Mendy, vice chairman of OCMD said this gesture will help to ease the suffering encountered by many families in the country, adding it’s one from their many activities planned for 2020.

“These are really trying times and we would like to urge other groups or individuals to also render support in any way they can,” he said.
Mendy, also head of the coordinating committee for OCMD, noted that all the mobilized resources for this intervention were raised from the membership of the organization through donations.

“Our faith teaches us that we should be each other’s keepers and that is exactly what OCMD is demonstrating today just as we have been doing over the years,” he said.
Mendy expressed gratitude to his colleagues in the organization for their benevolence and dedication to support the needy.

Father Anthorny Gabisi, described the gesture as in accordance with the teachings of Christianity, saying the organization is following exactly the dictates of Jesus Christ.
“Intention is what matters in gift.We are doing this because we were asked by Christ to do it,” he said.

Father Gabisi called on all members of the organization to continue the good work they are rendering to mankind, noting the gesture should be a tradition to ensure the younger generation takes it over from the helpful young men.
Representing the beneficiary, Simon Suta Mendy, expressed gratitude to the benefactors for the gesture, while describing it as very great in the eye of the needy and the nation as a whole.

Mendy called on all and sundry to support the needy, especially in this trying time in order to mitigate their hardship.