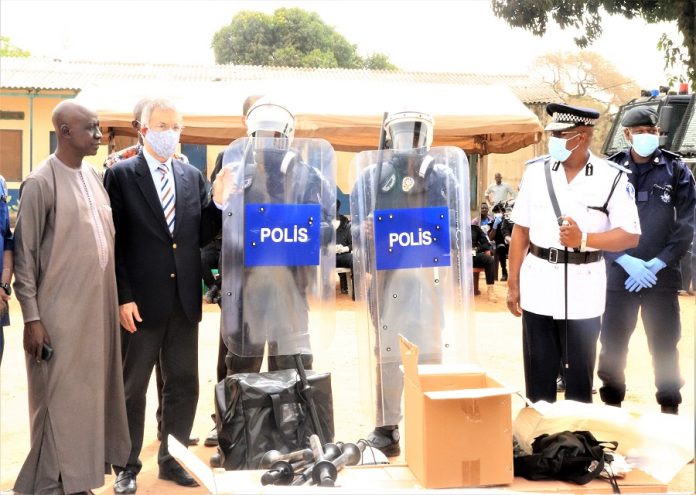 The Gambia O.I.C. Secretariat (Oicgambia) on Monday facilitated the presentation of 900 pieces of security gears and apparatuses from the friendly and brotherly Republic of Turkey to The Gambia Police Force at the headquarters of the Police Intervention Unit in Kanifing.
The modern policing equipment were acquired through the resource mobilization efforts of Oicgambia in preparation for the Heads of State Summit of the Organization of Islamic Cooperation in the country in 2022. The OIC Summit is the second largest gathering of world leaders after the United Nations General Assembly.

The Turkish Ambassador in The Gambia, His Excellency Tolga Bermek did the honour of presenting the items which included protective garments, riot shield, gas masks, gas filters, plastic handcuffs, head guards, batons, among other vital safety and protective equipment.
”These sets of equipment will greatly enhance the capacity of The Gambia Police Force in public order management”, the Inspector General of The Gambia Police Force, Hon. Mamour Jobe said while taking receipt of the materials. He extolled the ‘great partnership’ between Gambian and Turkish police forces, describing it as longstanding dating as far back as the first republic.

“We wish to take this opportunity, most sincerely, to thank the Chief Executive Officer of Oicgambia and the Turkish Embassy for facilitating this donation and other forms of support for the Gambia Police Force”, IGP Jobe added.

The Chief Executive Officer of Oicgambia, Yankuba Dibba expressed gratitude and thanks to the Turkish government, through the Ambassador, for its continuous support to the ongoing preparations for the Summit in 2022.

”Since our establishment in April 2018, the OIC Secretariat has benefitted immensely from the goodwill of the Republic of Turkey”, CEO Dibba said, highlighting various forms of capacity building training organized by the Turkish for the armed and security forces of the country in VIP protection, counter-terrorism, fingerprinting techniques, public order management, and cross-border crime management.

His Excellency, Ambassador Tolga Bermek said large scale summits require strong security arrangements as he reaffirmed the willingness of his government to continue supporting and sharing experiences with The Gambia as the country prepares for the forthcoming gathering of world leaders.

As part of its support to the OIC Summit preparations, the government of Turkey provided capacity building exercises in the country and beyond for several institutions including GRTS, diplomats, the police and other security agencies, among others.
The Secretary General and Head of the Civil Service and the Minister of Interior were represented.