On police brutality and the need for restraint: Letter to the Inspector General of Police

I salute you my dear senior brother and respected national police leader; I salute you, stamping my foot with the vehemence of a newly recruited field-force officer. I bid you “good morning, and permission to carry on, Sir!”
I write this epistle with mixed feelings because what I intended to do for almost a year now was to publish an essay on the need for Gambians to show more respect and honour to our men and women in uniform; the draft is still pending in my computer for some strange reason because normally I would be done with an essay within an hour of its conception and send it out to the media for publication; but my muse has failed me in that essay so far.

Now comes this letter which will certainly not be laudatory for you and your men and women in uniform; but like my favourite artist ST has advised in one of his songs “tonyaa kesso yeh execute!” So must I address you with the hard truth even though you are a senior brother to me with a relationship dating back to the late 80s. As the Mandinka proverb puts it “tonyaa fo nteriyeh; wo buka teriyaa tinyaa!” (Telling your friend the truth should not spoil your friendship)You would recall that three days before the January 26 protest by the “3 Years Jotna” group, I had posted on Facebook that you should consider resigning; and this was prompted by your decision to deny the United Democratic Party a permit for a rally. This most unwise decision was preceded by your office’s dilly dallying in the matter of permits for “3 Years Jotna” and APRC party’s planned protests.

I just felt that you were either indecisive or you were being subjected to undue pressure rendering your office incompetent in a period most critical in our evolution as a nation under transition. I launched that advice with great respect and concern due to the fact that you have served our country as a police officer and respected instructor of the Police Training School (PTS) with distinction, only to be found in such an unenviable position; this situation could lead to your possible ending of that career with ignominy. Is it worth the trouble of soiling an otherwise distinguished career at the tail end of your service?

I found out that my instinct did not fail me when I saw signs of potential police brutality as the January 26 protest started. This was when I made another Facebook post urging both your forces and the protesters to exercise restraint in the interest of peace. But some hypocrites jumped on my post deriving malicious conclusions from what I stated. True to my nature, I increased the volume of my warnings, this time speaking only to your forces and not the protesters because I knew that your men and women were the oppressors. Here’s my second post, in case you did not see it:
“Once again I am calling on The Gambia Police Force to exercise maximum restraint and not to unduly attack and hurt innocent Gambians…”
This was followed by yet another post on my public figure page on Facebook that was more elaborate:
Tough day for #Gambia. And we need #peace!
The protesters have rights to protest and they can do that in peace. The police have a job to do to maintain security and they can do that too in #peace!
I am reiterating my call on the IGP and The Gambia Police Force to exercise maximum restraint; and to avoid undue use of excessive force…
The manhandling of innocent Gambians and the #press is clearly reprehensible and must stop #Now
#Peace
Now Mr. IGP, the images I saw were quite disturbing. The beating of a harmless female protester already under arrest by half a dozen armed policemen; the gruesome bleeding of a young man who lost his teeth because of the grotesque act of one of your officers. And then the closure of media houses and malicious arrest of journalists without regard to due process. Is this what Gambians voted for in 2016?

To quote the official statement of The Gambia Bar Association issued after the protest: “We have credible reports of civilians including women being subjected to disproportionate use of force by the police. The heavy handed use of force by the police is a serious cause for concern. This is unacceptable, regressive and conduct unbecoming of a professional security force; which will only further undermine the citizen’s trust and confidence in the police.”

Was I right or wrong in warning you and your men in advance?
Did your officers have to hastily assault the peaceful protesters with gas canisters like they did to the Occupy Brikama Area Council protesters?
Is this the way you respond to peaceful protesters demanding an answer to a legitimate national question of why your Commander-in-Chief betrayed the nation’s trust and clings to power brazenly? Is this the right attitude of our security forces after the incidents of Kanilai where Haruna Jatta died and Faraba where young lives were cut short in broad day light?
Honourable IGP, let me conclude by clearly stating that I have never endorsed the “3 Years Jotna” protests and as a matter of personal principle I will never participate in protest; neither will I encourage any young Gambian to be involved in one. But I will defend the rights of my fellows citizens to exercise their democratic rights of freedom of assembly and expression without hesitation.

The fact remains that the main cause of all the confusion in this country is the decision of your Commander-In-Chief to dishonour a sacred promise to step down after three years as promised in his election manifesto. If your boss cannot honour his promise, then at least he should not aggravate matters by responding to the protesters’ demands for his resignation with the provocative announcement of the formation of his own political party during a rally in Banjul conducted at the expense of tax payers who funded his customary nation-wide tour.

My personal position, as pronounced on several platforms has been that President Barrow should honour the MOU of the coalition. If he cannot do that then the best approach would be to go back to the voters and engage them in respectful dialogue to allow him to complete his five-year mandate.

I have also stated several months ago that given the realities on the ground regarding the state of preparedness of the election authorities as well as the ill-advised announcement of the IEC chairman that his office was not prepared to conduct elections by December 2019, we should wait for 2021 and go to the polls. And I am not about to change my personal views on this anytime soon. But those holding the position of “3 years” have every right to express their opinion and to ask President Barrow to honour his promise; and the answer to that question should be words of conciliation and respect; not teargas and truncheons!
This whole episode that unfolded on January 26, brought back horrific memories and echoed the biblical statement from the first Book of Kings, 12: 11 “My little finger shall be thicker than my father’s loins. And now, whereas my father laid upon you a heavy yoke, I will add to your yoke. My father chastised you with whips, but I will chastise you with scorpions.”

Are you going to be President Barrow’s agent of terror while Gambians still weep for the excesses of his predecessor?
In conclusion, IG, I hereby remind you that The Gambia Police Force, an institution that I have always showed respect and touted, remains my favourite among our national security outfits. But that disposition and affinity, which you and your men are well acquainted with, will never blind me from calling you out when you breach the limits of professionalism and ethical conduct.

Once again, I salute you sir, and wish you good luck in the remaining twilight hours of your distinguished career.
Permission to carry on, Sir. 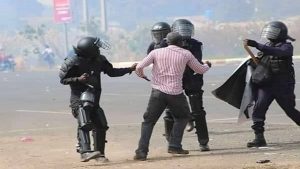 - Advertisement -
Share
Facebook
Twitter
Pinterest
WhatsApp
Previous articleLetters: The Government press release is the official declaration of dictatorship!
Next articleThe Gambia, we consume everything, produce nothing: a creative society – not an inventive one
Join The Conversation

March 1, 2021
One of the reasons why Africa is still left far behind in almost every aspect of development is because our decision makers seem to...