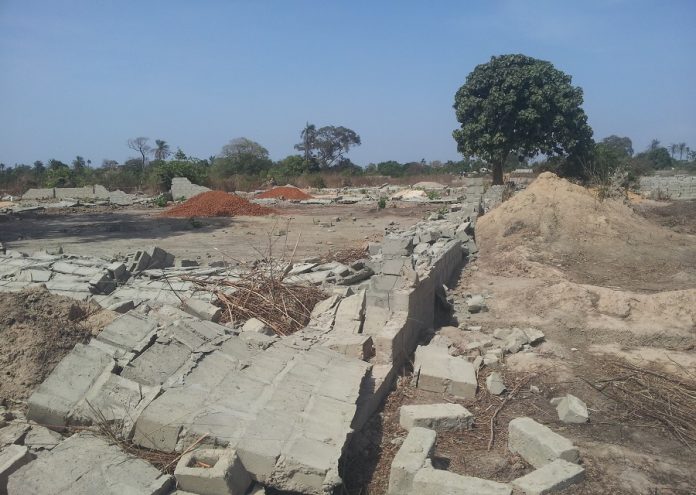 More than fifty compounds including a leased compound owned by former Secretary General Dawda Fadera were on Tuesday demolished in Tujereng on the orders of the Sheriff Division of the High Court.

The demolition exercise, carried out by officers of the Sheriff Division accompanied by physical planning and heavily armed personnel of the Police Intervention Unit, affected properties worth over D4.5 Million.

Hundreds of people including the owners of properties watched helplessly as their properties were vandalized.

The area where the demolition was carried out, according to the writ from the Sheriff Division, was owned by the family of one Karamo Jatta.

Four different sketch plans drawn by the department of physical planning with different pictures for the same area measuring about 600 by 373 meters were also accessed by The Standard.

The latest sketch plan which the Sheriff Division relied on to demolish the area was drawn in 2018.
The frequency of demolition exercises embarked upon by the Department of Physical Planning and Sheriff Department in recent times has continued to be a source of worry to many Gambians.

The latest series of such incidents occurred in Farato and Tawuto village in West Coast Region.

The demolished properties were located in an area that was a subject of dispute between Karamo Jatta and Yankuba Bayo.

But according to one Omar Jabang who lost over D600, 000 in the exercise they got notice of the demolition plan three days before it was carried out.

Jabang expressed his disappointment towards the Sheriff Division, accusing them of acting without consulting the right authorities.

Mr Jabang demanded the immediate resignation of the Sheriff.

He said he has spent over D600, 000 on his property already, including the construction of a fence.

Omar Bojang, a customs officer who is also affected by the writ questioned why the Sheriff Division should rely on four different sketch plans to effect a decision to demolish the place.

He called for the higher authorities to immediately intervene and stop the demolition of people’s properties without the pursuance of due process of the law.

Mr Bojang said they have written a letter to the Ministry of Justice to inform them about the alleged illegality of the Sheriff Division’s decision to demolish the area and the Minister of Justice has promised to look into the matter.

“We are very surprised that the demolition did not affect the land that is in question,” he alleged.