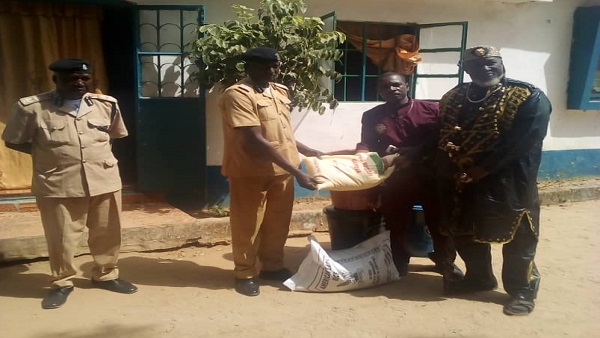 P-ARI Foundation on Thursday donated food and sanitary items to Jeshwang Juvenile prison.
The items included 50 bags of 25kg rice and 50 bags of 20kg sugar and 4 hand washing buckets at a presentation held at the prisons.
The Foundation, which has been operating in The Gambia since 2010, also operates in South East Asia and the Caribbean.

Speaking, His Excellency Ambassador Kenneth D. Jackson, Chief Executive Officer(CEO) of P-ARI Foundation, said they wanted to help the prison because they know that life is not the same with the ones in the prison.

CEO Jackson explained that a lot of times people in the prisons are overlooked and forgotten which was why they decided to assist them.
He described prisons as rehabilitation centers which require certain elements for effective rehabilitation, saying the first of such elements is food.

“We have also found out the camp’s other constraints and are ready to support them to ensure the effective rehabilitation process of inmates to ensure they have skills that will benefit them and society so that they do not return to prison when they get out,” he said.
He said he believes that the materials will go a long way to help not only inmates but also prison officers.

He commended prison officers for doing a good job and also encouraged inmates to take advantage of their time in prison and develop themselves so that when they get out, they do not have to come back but make positive contribution to society.
Modou Jarju, Deputy Director General 2 of the Gambia Prison Services hailed the foundation for their assistance especially with their feeding knowing that government cannot do it all alone.

Mr Jarju, who is the Commanding Officer Jeshwang Prison Camp also thanked them for their foresight.
He highlighted that the food items will go a long way in maintaining a peaceful environment at the prison as a hungry person is an angry person.
He urged other philanthropists and organisations to emulate P-ARI Foundation.