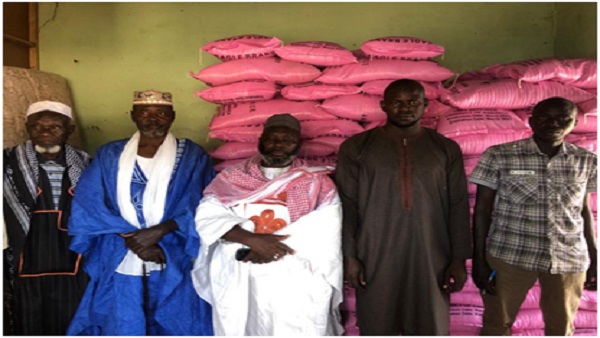 Speaking at the presentation, the former councillor, Yusupha Sanyang expressed gratitude to the natives of the village for their benevolent gesture.
He said the initiative, which started three years will significantly impact the lives of the beneficiaries, adding that it could not have come at a better given that many people are out of work due to the Covid-19.

The managing director of the National Roads Authority, Momodou Dodou Senghore thanked the village diaspora and called on them to keep up the momentum, saying there is nothing nobler than giving back to your community. “We have done our part…It is now their turn and I am happy that they have realised that,” he said.

Gibril Jeng, a youth leader in Bakoteh said: “We wish all of them the best and encourage other natives living abroad to emulate their brothers and sisters. We hope with the prayers of our elders and our general commitment towards the common good of Bakoteh we will be there very soon.”

The village Alkalo Tijan Jasseh expressed his heartfelt gratitude to the village diaspora and encourage the villagers to foster unity among themselves for the greater good.
Lamin Jammeh, the PRO of the committee leading the distribution said: “This donation of bags of rice is just the beginning of more humanitarian gestures that would follow in the future from the association. They have shown their commitment towards supporting the village whenever the need arises.”

Meanwhile, the Imam Ratib of Bakoteh Central Mosque, Imam Essa Jabang thanked the donors and called on them to continue supporting and cementing the religion of Islam wherever they are.

He said it is always encouraging seeing young people putting their resources into Islam, especially during the month of Ramadan.
“You will all agree with me that the donation could not have come at better time, given the fact that the country is battling against Covid-19,” he said.