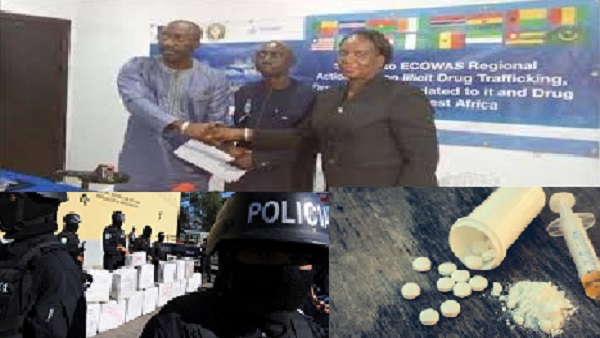 Anti-narcotic agencies of The Gambia, Senegal, and Guinea Bissau have signed a Memorandum of Understanding, MoU to fight illicit drug trafficking and other transnational organised crimes in the three countries.

The director general of the Drug Law Enforcement Agency of the Gambia, DLEAG Bakary Gassama, director of the judiciary police of Bissau Filomena, Maria Vaz Lopes Mendes and the director of the Senegalese Central office for the Suppression of Illicit Trafficking in Narcotic Drugs, Idrissa Cissé, signed the MoU on behalf of their respective agencies.

West Africa has emerged as a major transit point for the European and American drug markets with The Gambia said to be susceptible to smugglers and traffickers due to its porous borders.

The 2017 World Drug Report estimates that two-thirds of all cocaine smuggled between South America and Europe passes across the sub-region.

As part of the MoU, the three countries committed themselves to the sharing and exchanging of information, intelligence, law enforcement approaches and other collaborative border control measures in making the sub-region a hostile environment for criminals.

“This signing ceremony will usher in a new beginning of a model of international cooperation in the fight against drug trafficking and it constitutes a major step in proffering solutions to tackle the world’s drug problem,” Bakary Gassama said at the signing.

“We are once again reaffirming our collective resolve for greater international cooperation supported by a competent and capable law enforcement community,” he added.

According to Gassama, the absence of bilateral and multilateral law enforcement cooperation has been a major challenge that is undermining the investigation and interdiction of transnational organised crimes within the sub-region.

Filomena Maria Vaz Lopes Mendes of Bissau says: “The fight against organised crimes especially drug trafficking is imperative for the affirmation and consolidation of the democratic rule of law in the sub-region because the growing dynamics of these criminal phenomena in the geographical space shared by our countries has been a serious threat to peace political and social stability of our nations.”

She described the MoU as a strong manifestation of the will and determination of the three countries in the crusade to dismantling criminal networks.

Senegalese Idrissa Cissé said the MoU is here to strengthen the capacities of these states in the fight against transnational criminal orginisations and criminal networks who continue to adapt to new ways to further their illegal activities.