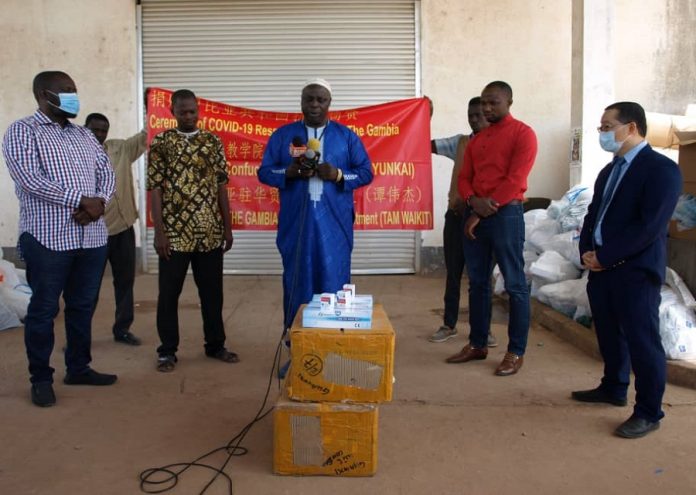 Gambian businessman and philanthropist Basadie Jabbi partnered by the Hong-Kong Confucian Academy donated two thousand rapid testing kits to the Ministry of Health as part of efforts to curb the spread of the coronavirus pandemic in the country.
The items were received by senior officials of the health ministry at a brief handing over ceremony held at the Central Medical Stores in Kotu.

Jabbi who is also Gambia’s co-special envoy for investment to the People’s Republic of China, said the gesture is an answer to the call by the executive to expedite national strategies to combat the virus in the country.

He said the fight against the ‘invisible enemy’ requires collective concerted endeavor from all Gambians, amid dire hard knock effects on the lives of the people.
“In the light of these difficult times, it is a moment that we should all come on board and support each other by making sacrifices for the love of our country,” Jabbi said.

Jabbi explained that the kits can conduct tests on over dozens of people.
Modou Njai, the director of health promotion and education said rapid testing is a critical component in fighting Covid-19.
He noted that the items will help health care workers to conduct laboratory tests on suspects.

Njai hailed the donor for the gesture and assured them of the effective utilisation of items.
Deputising for the director of national laboratory services, Modou Lamin Jammeh said the gesture is in line with WHO recommendation for a rapid testing in detecting cases, adding that it would go a long way in enhancing the work of frontline health workers.