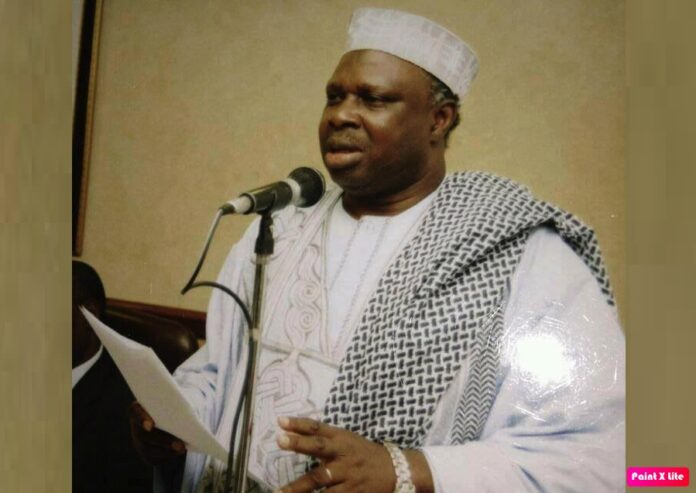 On Wednesday, 28th November 2018, the sun set on the life of one of the great journalists The Gambia produced. Last month, specifically on Saturday, 28th November 2020, friends and family members gathered at Dippa Kunda and prayed to Allah to continue to let perpetual light shine upon his soul.

Swaebou Conateh died in his seventies after prolonged ill health. He was survived by wife Aji Sukai Bajan, ten children, 14 grandchildren and a great grandson.

Swaebou attended Kanifing Primary School from 1950 to 1957, then St Augustine’s High School where he was well known for his well-crafted and didactic writings. From 1963 to 1964 he attended Gambia High School.

In Lawrence (Kansas, United States) he attended the University of Kansas from 1964 to 1965 to study journalism as part of the African Scholarship Programme of American Universities (ASPAU). In addition to journalism, he also took courses in creative writing, writing poetry, short stories, dramas and essays. Then he was briefly at the University of Massachusetts in Boston in 1965 and then returned to the University of Kansas in 1965 until 1968, he received a BSc. He was probably the first Gambian who earned a university degree in journalism.

In 1972 he did a BBC Management Course at the Polytechnic of Central London in the UK.  He later earned a Master’s degree in Mass Communication and Public Information from the University of Lagos in Nigeria.

From October 1969 he was news editor and   radio announcer for Radio Gambia. In 1974 Conateh was appointed director of Information and Broadcasting, replacing the late Lamin Mbye. During his tenure as director of Information and Broadcasting, Conateh witnessed many developments in the broadcasting sector, particularly with regard to Radio Gambia, which has greatly improved its national coverage and reach.

Conateh was also a pioneer in promoting the Gambian literary profile as he was the first editor of Ndaanan (also N’daanan), The Gambia’s first literary publication, which he co-founded with other Gambian intellectuals in 1971. His colleagues in Ndaanan included intellectual heavyweights of the time such as Charles Jow, Hassoum Ceesay Sr, Dr Lenrie Peters and Gabriel Roberts. They produced the first volume of Ndaanan, the aim of which was to provide an outlet for creative Gambian writing. Conateh also tried his hand at poetry and published his first volume of poetry in 1981; Great Wrinkles Up The Sky’s Sleeves, the poems described the process of change that was observed in his birthplace, Dippa Kunda, which gradually transformed from a rural settlement into part of the urban conglomerate of Serekunda.

In 1986 he resigned from the civil service and joined the Pan-African News Agency (also PanaPress, PANA and was initially sent to Lagos, Nigeria, where he headed the first regional office of PANA. After a few years in Lagos, he was transferred to PANA’s headquarters in Dakar, Senegal, where he stayed until 1991 and finally returned to The Gambia.

After his retirement in 1992 he founded the Gambia Communication Agency and Baroueli Enterprises and was editor of the weekly magazine The Gambia News & Report (also Gambia News and Report Weekly Magazine). Every year from 1992 to 2016, the magazine presented the highly regarded Person of the Year award for Gambians who have distinguished themselves in their respective fields.

Swaebou Conateh died after a long illness and was buried on November 29th in the Dippa Kunda cemetery. Hundreds of mourners attended the funeral.

We hope The Gambia News & Report returns to the newsstands soon as a vibrant and regular publication so that we can return the selection for the recipient of this singularly important award to them.

Dear editor, A global pandemic, a national concern, and a concession the Government has a legitimate responsibility to manageinternational travel with a view to protecting...
Read more
Letters

Serious threat to American peace and democracy Dear editor, Regardless of the five lives unnecessarily lost in the January 6, 2021 insurrection of our capitol by...
Read more
Letters

Dear editor, Addressing a throng of enthusiastic supporters in Banjul at the conclusion of his month-long Meet the People's Tour, the Gambian President Adama Barrow...
Read more
- Advertisment -