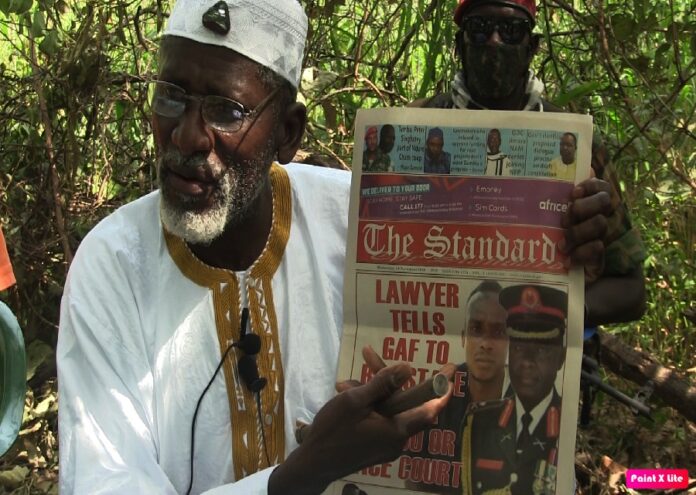 Salif Sadio, the leader of the separatist fighters in the Casamance has said he never sired any child from a marriage or outside wedlock. “I have no child in the Casamance or anywhere else within the four corners of the earth. I have vowed never to get married until Casamance is free because I will not marry, father children and bring them up in servitude,” he said.

Speaking in a rare 95-minute interview with a Gambian journalist at one of his bases in the Casamance on Sunday, Sadio, who is the head of Mouvement des Forces Dèmocratiques de Casamance (MFDC) said speculation that he is the father of Omar Sarjo, a soldier dismissed from the Gambia National Army, is totally false.

Speaking in Mandinka, Sadio who said it is a misnomer to call him “a rebel” and insisted on being referred to as “a freedom fighter”, explained: “I joined the guerilla war in the Casamance even before I grew teen beards. I am about 50 or 60 years old now and I do not have time for women, marriage or maintaining a family. I have no time for that. My whole life is dedicated to the struggle for Casamance independence. It is a lie to say that he [Omar Sarjo] is my son. I have never fathered any child and I do not believe that you can have a child through mere asexual imagination.

“If he [Omar] is the son of Salif Sadio, he will be here helping his father. What will he be doing in The Gambia? His father is here warring. (Looking at the copy of The Standard featuring a story on him being the father of Omar Sarjo). He looks like he is a grown up. He even spots a moustache! (laughs) I think he can sling a gun. If he was my son, he would be here with me. My brothers and sisters have children, some grown up, but Salif Sadio has no child!”

He said people spinning such tales “should shut up if they have nothing to say” and warned the government of The Gambia to be wary of the ploys of “the enemies” who are pushing The Gambia into the cauldron of tribalism and ethnicism.

“If anything hurts The Gambia, it will affect the Casamance, Guinea Bissau, Guinea Conakry and Mali. Whether Gambians or Casamançais like it or not, they are related and one people. Therefore, we should be wary of the divisive schemes of Europeans [and their puppets in Africa] who want to foment trouble and bring about anarchy like they have done in countries like Libya, Cameroon and elsewhere,” Salif Sadio stated.

The issue of Omar Sarjo’s identity came to the fore recently when Gambia government spokesman Ebrima Sankareh said Sarjo allegedly enlisted into GAF with fake credential, trained and served until he was finally dismissed and voluntarily left the shores of The Gambia for his “native” Casamance.

Sarjo maintained that he is Gambian, born in Kabekel near Brikama and that Salif Sadio was not his father as widely believed. He has since sued Mr Sankareh and the attorney general.

Editor’s note: Read The Standard on Thursday for more stories from the interview with Salif Sadio.