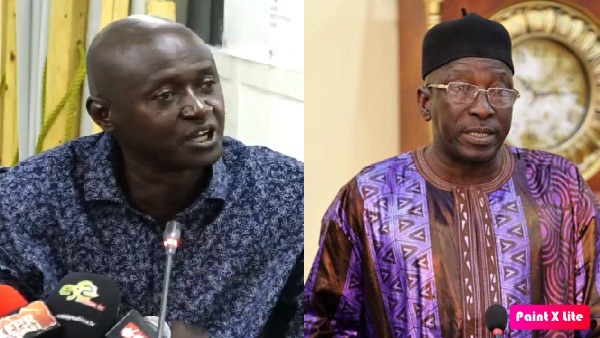 The lone survivor of the 44 Ghanaians massacred in The Gambia in 2005 yesterday asked TRRC to subpoena Interior Minister Yankuba Sonko, Basse Police Commissioner Ensa Badjie alias Jesus, UN – Ambassador Curtis Ward, who led the UN/ECOWAS fact-finding team to investigate the killings in 2008 and Dr. Mohammed Ibn Chambas to appear before the commission.

“Our expectation is that the Gambia TRRC will subpoena current and former high ranking Gambian officials who took part in the arrest, detention and killings of the Ghanaian migrants,” the families said in a statement read by Martin Kyere.

“Some of these Gambian officials will include current Minister of the Interior, Yankuba Sonko and current Gambian Police Commissioner in charge of Crime Management Ensa “Jesus” Badjie who destroyed the diary log of the Barra police station which recorded the Migrants’ arrest and made a new log and backdated it, according to a 2018 report by Human Rights Watch and TRIAL International. These officials also carried out a cover-up of the unlawful killings of the Ghanaians and other West African migrants before international investigators from the UN and ECOWAS arrived in the Gambia to investigate the unlawful killings,” Martin alleged.

In July 2019, three soldiers who were part of the ‘Junglers’, told the TRRC that they participated in the unlawful killings of the Ghanaians and other West African migrants on the orders of Yahya Jammeh.

Last month, the TRRC announced it would grant the Ghanaian families request to appear before its hearings.

The families said following the announcement they again wrote to the TRRC this month, reiterating their earlier request in October 2019 for guidance about the TRRC’s rules of procedure and when they would be given a day before the TRRC.

“The TRRC has not officially responded to our request. We urge them to, as a matter of urgency provide us with the requested information. We urge the TRRC to give our case, which constitutes the single highest number of unlawful killings and enforced disappearances in the Gambia, the attention it deserves. All lives matter and we do not want to believe that our case is not being given the needed attention because we are not Gambians,” he said.

Turning to their own government, Kyere said: “Our own government under President Nana Addo Dankwa Akufo-Addo has not taken any meaningful steps to get justice and compensation for us, the citizens whose interest he swore an oath to protect and defend. Why? Is it because we, the victims, are from poor homes; we have no formal education and are among the vulnerable in society?”

“This lack of action goes against a Memorandum of Understanding which the Government of Ghana and the Gambia signed in which both countries pledged to pursue the matter and bring the perpetrators to justice if new information emerged which pointed to the complicity of the perpetrators.”