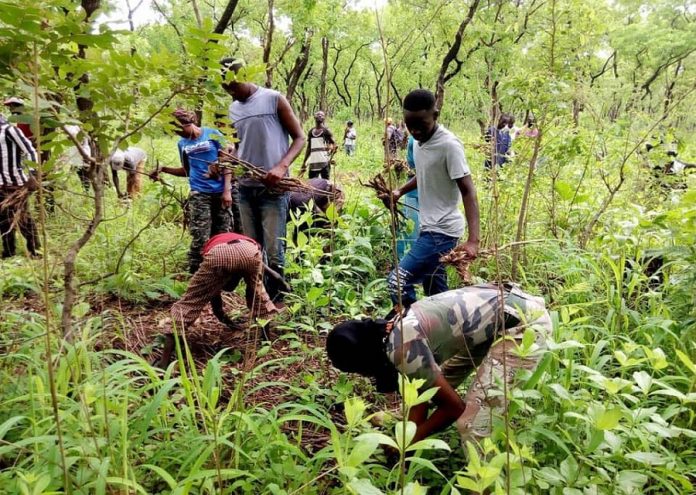 A number of senior Gambian citizens and forestry experts have written a letter to President Barrow soliciting his intervention to abandon plans to de-reserve a part of the Salagi forest park.

Mr Presdient, the decision to de-reserve a portion of Salagi Forest along Sukuta-Jambanjelly Highway should not be allowed to stand.

We the undersigned write to appeal for your personal intervention to reverse the decision to de-reserve a portion of Salagi Forest Park.

It is for the above reasons that we find it necessary and urgent to bring to your attention our concerns about the de-reservation of a portion of Salagi Forest Park along the Sukuta-Jambanjelly Highway.

It has come to us as great discomfort and surprise that a letter signed by the Permanent Secretary Ministry of Environment, Climate Change and Natural Resources (MECCNAR) (leaked to the social media) was sent to the Attorney General’s Chambers, Ministry of Justice, approving the request for the de-reservation of a portion of Salagi Forest along Sukuta-Jambanjelly Highway.

The letter went on to state that approval is granted “to de-reserve a depth of 80 meter wide and 1000 meters or one (1) kilometre long excluding the 30 meter wide along the highway road reserve metre as per sketch attached. This will avail MoLRG&RA the allocation of a strip land for institutional purposes which will impact positively on the economy of the country.”

The area in question is part of the natural forest (commonly referred to as amenity belt), that was deliberately left untouched when the rest of the park was converted to fast-growing Gmelina plantation.

The idea at the time was to allow some portions of the forest park to remain under natural vegetation in order to continue to provide ecosystem goods and services for the benefit of neighboring populations and wildlife species that depend on the park.

Although degraded as a result of increased population pressures, this area continues to provide numerous critical ecosystem goods and services including the maintenance of the underground waters in the aquifers including that of NAWEC water boreholes (being one of the major sources of our water supply); grazing for thousands of livestock from neighboring settlements; firewood and fruits for thousands of poor families within the vicinity of the park; bird watchers; Eco-tourists and nature lovers in an increasingly affluent neighborhood.

To put things in perspective a little over 150,000 people live within 2.5 kilometers from Salagi Forest Park. With the current population trajectory, this will reach 200,000 by the next census in 2023 thus the need for maintaining the ecological integrity of the park.

This de-reservation request followed another one just few years ago, that allowed NAWEC to expand its Water Facility at Sukuta. Re-allocating 8 ha of a 100 ha natural forest area, in our view will significantly undermine the ecological integrity of the park, particularly on its ability to sustain the biological diversity and water production functions.

In addition, allocating this land for unspecified “institutional purposes” including a heavy equipment depot and a petrol station presents serious threats to the boreholes and our domestic water resources in the event of an industrial accident and likelihood of fuel seepage into the underground water table.

Goes counter to the NDP goal to ensure our environment is sustainably managed and conserved.

It must be recalled that one of the critical enabling goals of the National Development Plan is to ensure that Gambia’s environment and natural resources are sustainably managed and conserved to increase resilience for the benefit of all. This decision to convert 10 percent of the last remaining natural forest in a gazetted park to industrial land use, no matter the economic promise in our view goes counter to the above stated goal and will no doubt send the wrong message to our development partners.

It is a significant set back in meeting our commitments to Multilateral Environmental Agreements and National Policies.

The Gambia is signatory to a number of international environmental treaties, conventions, protocols, agreements and programmes including the Convention on Biological Diversity (CBD), United Nations Framework Convention on Climate Change (UNFCCC), the UN Reductions in Emissions through Deforestation and Forest Degradation (REDD), the National Adaptation Programme of Actions (NAPA) and Nationally Appropriate Mitigation Actions (NAMA) and Intended Nationally Determined Contributions (INDCs), all of which require commitments to protecting natural ecosystems and the sustainable utilization of the associated ecosystem goods and services they provide.

De-reserving a portion of this park will present a significant setback to achieving these long-term conservation commitments, national or international and will represent serious disregard for all the efforts and money spent by the Gambian people during the 67 years of protection and management.

Our national Forest Policy advocates for sustainable management of our remaining forest through state, community and private participation. It categorically indicates the need to maintain 200, 000 hectare under community forest managed by communities themselves.

. Therefore this action does not reflect what government advocates for and is sending the very wrong signals to communities we are encouraging to complement government’s efforts in the drive for sustainable forest resource management.

It can not be the economy vs the environment
While we recognize your government’s commitment to improving and expanding the Gambia’s economy, such development cannot be sustainable without the protection of our natural ecosystems. Sustainable development as defined in the Brundtland Report is “development that meets the needs of the present without compromising the ability of future generations”.

De-reserving a portion of a national forest park for the sole purpose of converting it into land use other than its natural vegetation, is not in our view sustainable development. If history is to teach us anything, Bijilo Forest Park is one to point to.

In 1982 when Bijilo Forest Park was to be de-reserved and allocated for hotel construction, some of us and colleagues at the Gambia-German Forestry Project helped reverse that decision.

Within a few short years the park was transformed into the eco-tourism Mecca of the Gambia, attracting thousands of birdwatchers, employing thousands of youth and paying millions of Dalasis into the government’s Consolidated Revenue fund each year.

Based on the above mentioned reasons, we implore your personal intervention to reverse this decision to de-reserve any portion of Salagi and in the future commit your government not to de-reserve any other gazetted Forest Park for any use other than Environmental.

We are in no doubt that the Ministry of Lands can find 8 hectares in some other part of the country that can be used for “institutional purposes” without impinging on our ability to meet our national and international environmental obligations.

We believe that is what’s best for the Gambian people, environment and it is good for the economy and good for your legacy.

Let us conclude with a quote from the Banjul Declaration of 1977. “It would be tragic if this priceless natural heritage, the product of millions of years of evolution, should be further endangered or lost for want of proper concern”.

We thank you for your time and kind consideration.
Yours faithfully,