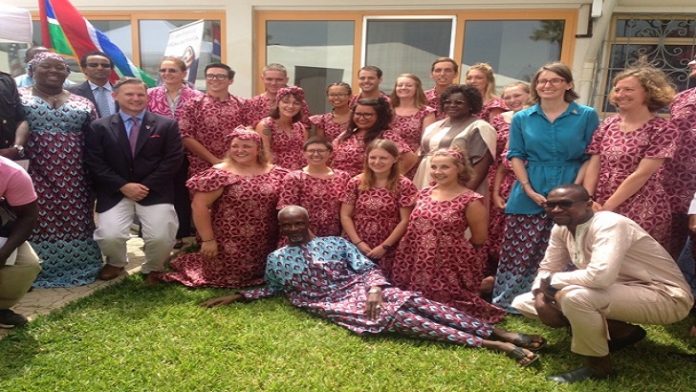 A total of 20 Peace Corps who underwent training in various local languages and the way of life of Gambians graduated from the Kiang Massembeh Training Centre in LRR.
The US volunteers have now been sworn-in as teacher-trainees into various primary schools in regions across the country to help advance learning in Gambia.
They were taken through an intense two-month long pre-service training program. They are expected to serve now a period of two years of volunteerism in NBR, URR, CRR and LRR.
Their swearing-in ceremony was attended by US Ambassador to The Gambia, Carl Paschall, Gambian basic education minister, teachers and family members and well-wishers of the graduates.
Mrs Claudiana Cole, basic and secondary education minister, used the platform to recognise the role of volunteers in Gambia’s development.
She said since 1967, when volunteers started coming to The Gambia, thousands of them served and built special ties with Gambian communities that created a lasting effect on the lives and livelihood of those communities.
She expressed The Gambia’s sincere appreciation to the government of The United States of America through its Ambassador to The Gambia.
“This year marks the 58th anniversary of the founding of the Peace Corps and the 52nd of the partnership between Peace Corps and The Gambia government,” Minister Cole noted at the US Ambassador’s residence in Fajara, where the event was held.
According to her, Peace Corps also contributed in various sectors like agriculture and health.
“It is worthy to note that the role of the Peace Corps is to complement the efforts of The Gambia government which has over the years covered poverty reduction strategy by improving the agriculture sector,” Mrs Cole stated.
Turning to the volunteers, she said: “Lives of Gambians have been touched by your interactions with them.”
She said the purpose of volunteerism in rural Gambia is to improve teaching methods for quality education, especially in English language proficiency and literacy,.
Ambassador Carl Paschall said the spirit of volunteerism and community service has long been a defining characteristic of the American society.
He said a people-to-people approach is one of the greatest ways to promote world peace, understanding and friendship, signifying the important role of Peace Corps.
“Since the establishment of the program in 1967, over 1,850 Peace Corps volunteers have served in The Gambia,” the ambassador disclosed with visible pride.
He then challenged the graduates to give their all to uphold the good image that Peace Corps are known for.
“Through your actions and attitudes, your service and your kindness to others, you will show that Americans care deeply about Gambians and are dedicated to working side-by-side with them for the long term,” Paschall told the volunteers. “You will make clear in a tangible way how much we respect and cherish The Gambia-US relations,” he tasked them.