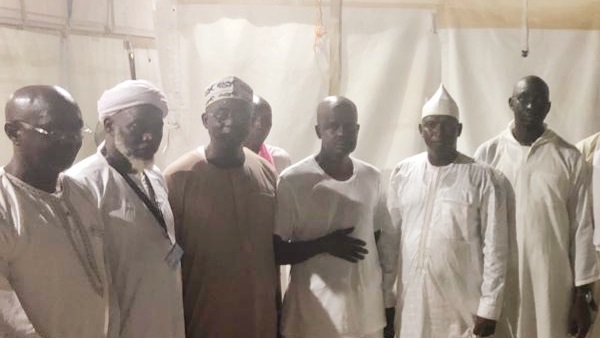 The visit was borne out of courtesy to Gambia pilgrims as well as give the SIS DG first-hand information on how the pilgrims were doing and hear experiences, challenges and views on both the conduct of this year’s Hajj operations and ways to make this important and life changing religious pillar easier to fulfill in the years ahead.

This is more so because the SIS in it ongoing reforms is placing high premium on Hajj as major national affairs that deserves the attention and support of the SIS.

Over the past three years, SIS involvement and support to Hajj Operations and pilgrims affairs have been raised unprecedentedly: as part of the reforms and reorientation process, the Service has taken keen interest in supporting the fulfillment of this important Muslim pilgrimage to the Kingdom of Saudi Arabia by way of interacting and taking close interest in Hajj affairs with the Gambia Hajj Commission, Airline operators certified by government to lift pilgrims, Officials of the Gambia Embassy in the Holy Land as well as by providing staff critical support to our pilgrims especially, the weak, the needy and lost ones.

During the visit, the SIS DG received encouraging testimonies from pilgrims and the airline agencies on the invaluable support they receive from SIS officers performing Hajj with them describing the officers as “commanders and commandos” and extoling their support role in searching/locating lost pilgrims, assisting the sick and infirm in performing the rites of Hajj and consoling the distress and fainthearted.

In response, the SIS DG enlightened and assured that this is the spirit and context of the New role of the SIS, in the discharge of its sacred duty and responsibilities in the service of Gambians both home and abroad.

He reiterated that the SIS will continue in this trajectory in the discharge of its mandate in the national interest of all Gambians under the constitution and in support of peace, national reconciliation and religious pursuits such as Hajj.

He urged pilgrims to pray for continuous peace in the Gambia, national harmony, tolerance, social cohesion and the attainment of government national development agendas, as these are important prerequisite for enabling citizenry to undertake this important Islamic pillar.

The pilgrims and Hajj officials assured DG of continuous prayers for peace and development in the Gambia.