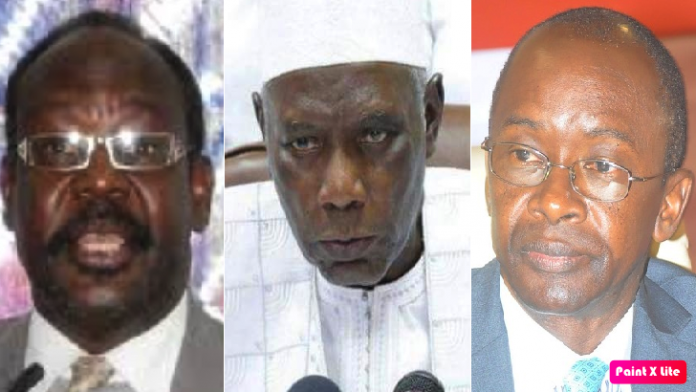 On Thursday 22nd October 2020, the Constitutional Review Commission (C.R.C.), under the leadership of its Chairman, Justice Cherno Jallow called its last press conference, and alarmingly announced to the general public, and indeed by extension to the whole world, that it was dissolving itself. The final C.R.C. press release, inter alia reads: “Today, Thursday 22nd October 2020, The Constitutional Review Commission (C.R.C.), stands to be dissolved. This is in line with the C.R.C. Act of 2017, that requires the Commission to dissolve after one month following the Draft Constitution Promulgation Bill is tabled at the National Assembly….” The aforesaid press release went on to say: “The dissolution affects all but the C.R.C. Secretariat, and a very few members of Finance and Human Resources Departments, will continue till January 2021, for auditing purposes. This extension is in pursuance of Section 22 (2) of The C.R.C. Act…”

The Section of paramount importance, which clearly talks about the dissolution of the C.R.C., which the C.R.C. members mischievously refused to quote in the C.R.C.’s final press release, for reasons best known to themselves, is Section 22 (1) of the C.R.C. Act (2017), which reads: “The Commission shall stand dissolved within one calendar month, after the date of enactment by the National Assembly, of The Bill introducing the Constitution.” It is axiomatic or it goes without saying, that the aforesaid “…. One calendar month…..”, mentioned in the aforesaid Act, has now clearly expired, and the aforesaid Section 22(1), despite its ambiguous nature, by any stretch of the imagination, clearly does not give the C.R.C. members, the authority or mandate to dissolve themselves, after they have fully executed, their two statutory official functions, as clearly stipulated, in Section 6 (1) of The C.R.C. Act (2017). As a senior Canadian-trained theologian, the appropriate Biblical quotation, that comes surfacing to the landscape of my mind is: “There is none so blind, as he/she who refuses to see…”, from the book of Jeremiah, Chapter 5, Verse 21.

As a senior legal draftsman, professionally trained in legal drafting, by the late and erudite Professor Crabbe of Ghana, it is my honest and professional legal opinion, that the aforesaid important Section 22 (1) of the aforesaid Act, was negligently drafted, because it is silent about who has the legal power or authority, to dissolve the C.R.C., after it has fully fulfilled its statutory mandate or official functions, which is explicitly stated in Section 6 (1) of The C.R.C. Act (2017), which reads:- “ The functions of the Commission, are to draft a new Constitution, and prepare a report, in relation to the Constitution.” As soon as the C.R.C. Chairman, Justice Cherno Jallow, handed over the so-called Final Draft Constitution, and a report about the Constitution, to His Excellency President Adama Barrow, at the State House on 30th March 2020, in the presence of other C.R.C. Members, Honourable Cabinet Ministers etc, at this magical moment, the C.R.C., had fully executed its two important official functions, as clearly stated in Section 6(1) of the aforesaid Act. They then automatically became: “Functus Officio” (Latin: ie they have already fully executed, their Official mandate or functions).

As I have already mentioned in crystal clear terms, Section 22 (1) of The C.R.C. Act (2017), has been negligently drafted, because it clearly does not say, in crystal clear terms, who has the power or authority, to dissolve The C.R.C. after it has fully executed its aforesaid Statutory functions. “To err is human, and to forgive, is divine”, as the adage goes. But this does not give The C.R.C. Members the licence, to mischievously interpret Section 22(1), in such a way to justify its so-called self-dissolution. When in actual fact, as far as Section 22(1) of the C.R.C. Act (2017) is concerned, the C.R.C. Members, clearly have no power or authority whatsoever, to dissolve itself after fully executing its two aforesaid statutory functions.

No matter which of the 3 Cannons of Statutory Interpretation one uses (be it the Literal Rule, the Golden Rule or the Mischief Rule), one will always inevitably arrive, at the same logical legal conclusion (ie that the C.R.C. Members, have no power or authority whatsoever, to dissolve itself). For the intellectual benefit of readers, who are not legally minded, let me take the next legal step, of explaining here, the legal meanings of the 3 Cannons of Statutory Interpretation. The Literal Rule means, interpreting the words used in a Statute/Act, giving them the ordinary dictionary meanings, of those words in question. The Golden Rule, is only used, when interpreting words used in a Statute/Act, by giving them their ordinary dictionary meanings, amounts to “manifest absurdity.” According to The Oxford Advanced Learner’s Dictionary, by A.S. Hornby, “absurd”, is authoritatively defined as: “…. Completely ridiculous, not logical and sensible….” Surprisingly, the aforesaid world class dictionary, clearly does not define “absurdity”, it only gives an example of it. Google defines “absurdity” as: “…. The quality or state of being ridiculous or widely unreasonable.” In the light of the above, “manifest absurdity”, therefore means: “absurdity”, that is very clear for all to see. Finally, the Mischief Rule means, interpreting the words used in a Statute/Act, and when doing so, the reader must have due cognizance, of which mischief Parliament intended to abolish in society, at the time, when it was passing a certain bill?

Who is the most appropriate person or authority to dissolve the CRC?

The obvious legal answer to this important legal question is: His Excellency President Adama Barrow, president of the Republic of The Gambia and Commander-In-Chief of the Gambia Armed Forces. Section 20 of The Interpretation Act, Cap 4: (1966), is titled: “Power To Appoint To Include Power To Suspend Or Dismiss”, and it clearly reads: “Where by or under any Act, a power to make any appointment is conferred, then, unless the contrary intention appears, the authority having the power to make the appointment, shall also have the power, to suspend or dismiss any person appointed by it, in exercise of the power.” Going by this authoritative Statutory provision, logically speaking, if His Excellency President Adama Barrow, is the Statutory appointing authority for The Chairman and other members of The C.R.C., according to Section 5 of the C.R.C. Act(2017), then His Excellency the president himself, is therefore the most appropriate person or authority, who has the power to suspend dissolve or dismiss the C.R.C. Members, to the exclusion of all others, because he has officially appointed them, in pursuance of Section 5 (1) and Section 5(2) respectively, of the aforesaid Act. Therefore, by bogusly declaring, their so-called self-dissolution, the Chairman of the C.R.C and other members of the commission have collectively usurped the statutory power or authority of the president, to dissolve the C.R.C., after it has fully executed its 2 aforesaid official functions. Therefore, by bogusly declaring its so-called self-dissolution, both the C.R.C. Chairman and other C.R.C. members, have clearly and collectively acted “Ultra Vires” (Latin: ie in excess of its official power or authority). Therefore, in effect, The C.R.C., despite its so-called self-dissolution, is in fact not yet officially and properly dissolved. I am vociferously putting it to the C.R.C. Chairman, Justice Cherno Jallow, and other C.R.C. Members, that notwithstanding their bogus self-dissolution, The C.R.C. Is still very much alive and well. It is simple logic and common sense, that The C.R.C. Members cannot possibly have the power to dissolve themselves, because they never appointed themselves to their respective offices. They are all presidential appointees, and since His Excellency the president officially appointed all of them, it therefore clearly means, that only His Excellency the president, who has the power or authority, to dissolve them. Therefore, it is now up to His Excellency President Adama Barrow, to rightly use his Statutory power or authority, as clearly dictated by the aforesaid Interpretation Act, and this presidential action, in the eyes of the law, will be very legal indeed, without an iota of illegality.

An excellent example of His Excellency President Adama Barrow, having the statutory power or authority, to officially dissolve a Commission, whose members were Officially appointed by him, is Section 31(1) of The Truth, Reconciliation and Reparations Commission Act (2017), which is tilled:- “ Dissolution Of The Commission”, and it reads:- “The President shall, not later than three months after the submission of the report of the Commission, dissolve the Commission, by notice in the gazette.” Section 29(6) of The T.R.R.C. Act (2017), is titled: “The Commission’s Report”, and it reads: “The Commission’s shall submit a Report of its work to The President, at the end of its operations”. The T.R.R.C., which is still ongoing, is presently under the able leadership of Dr Lamin J Sise, its Chairman, and Mrs Adelaide Sosseh, as its able Deputy Chairperson and the Chairperson of the Reparations Committee. So far, the T.R.R.C. Chairman, the Deputy T.R.R.C. Chairperson, all T.R.R.C. Commissioners, and all other T.R.R.C. employees, should all be warmly congratulated, for an excellent job so far, as they collectively embark on the noble national crusade, to make assurance double sure, that all victims of human rights violations, during ex-president Yahya Jammeh’s era: (ie from 22nd July 1994 to January 2017), at the end of the day get justice, which they so dearly deserve: “…. Let Justice guide our actions, towards the common good…” (The Gambia’s National Anthem).

Another powerful legal weapon, which can effectively be used by His Excellency President Adama Barrow, to effectively and legally dissolve the C.R.C. is for him to evoke the executive powers, that are conferred on him by Section 76 (1) of our 1997 Constitution, which is still legally in force, which is titled: “The Executive Powers”, and it reads: “The Executive Power of The Gambia, is vested in The President, and subject to this Constitution, shall be exercised by him/her, either directly or through The Vice President, Ministers , and other Officials responsible to him or her.”

To conclude this intellectual discourse, let me make it abundantly clear that there is nothing personal about this timely legal article. I am writing it: “Pro Bono Publico”, (Latin: ie for the good of the public), and to rectify a monumental and totally unacceptable legal and constitutional error, on the face of the record. It will also serve as public civic education for all who care to know about the complex law. “Ignorantia Juris Non Excusat” (Latin: ie ignorance of the law, is not an excuse). I rest my case.