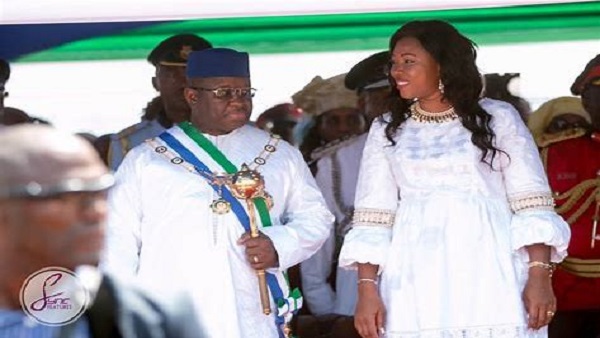 Hello, we are back again with our second First Lady on the continent. On this issue, we are going to tell you about Fatima Jabbe Maada Bio; the actress-celebrity turned politician’s wife, a formidable figure on the Sierra Leone political landscape.

Hmm… so who does not like the world of glamour and glitz? Be it actor, actress or politician, people are always desperate to know about their personal lives, that larger than life persona.

The relationship between leaders and celebrities is quite old. The areas of both politics and film industries have been enticing one another since time immemorial. We have heard about celebrities who have married within their industries or with other celebrities.
There are some celebrities who have gone on to marry people who happen to be leaders (Dukes, Princes, Presidents) for example American Actress Grace Kelly stopped acting and wed Prince Rainer III of Monaco(1952-1982) , Meghan Markel (became a duchess by marrying Prince Harry(United Kingdom) or would be world leaders …

Another celebrity actress turned First Lady who stepped in to the role of first lady beautifully is…. Fatima Maada Bio, the First Lady of Sierra Leone (2018- present).
Since 1971, Sierra Leone has had six first ladies. The first was Rebecca Stevens, wife of former President Siaka Stevens, (1971-1985). While Stevens accompanied her husband to ceremonies and events, she preferred to keep a low profile. 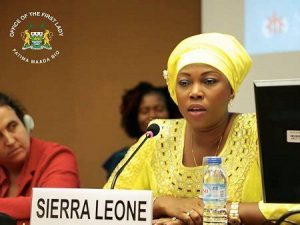 Her successor Hannah Momoh wife of John Momoh (1985-1992) a low key figure who mostly kept to herself during her tenure and eventually moved to London in 1989.
Sierra Leone’s third first lady was one of the country’s foremost lawyers Patricia Kabbah (1996-1998). She had been the chairperson of the committee that restored Sierra Leone to civilian rule and she helped draft the country’s constitution in 1995 When her husband Ahmed Tijan Kabbah(1997-2008) won the election, she sought to set up the first Office of the First Lady in the history of Sierra Leone. Kabbah died of cancer in 1998.
Shortly after her death, President Kabbah married Isata Kabbah who became the 4th first lady.

In 2007, Sia Koroma, a biochemist and psychiatric nurse, became the 5th First lady of Sierra Leone. Koroma successfully established the Office of the First Lady and completely redefined the role. In addition to her representative role, she worked on three initiatives: WISH to support mothers and children, FLAXIS to provide training and the Danké Koroma Foundation.

The current First Lady of Sierra Leone is Fatima Maada Bio, wife of President Julius Maada Bio who continued in the tradition of Sia Koroma in maintaining the Office of the First Lady.

As a very promising and determined young woman, she had a successful career in the entertainment industry under her maiden name Fatima Jabbe. Bio is a Patron of a number of charities in the UK, including the John Utaka Foundation which helps African children and young people cope with health challenges.

A talented scriptwriter and executive producer, she also starred in many Nollywood movies and is considered one of the most talented and versatile actresses of her time; she has countless awards to her name (an award for “Miss Africa 2000” in the UK; “Best Supporting Actress” for the movie “Mirror Boy” at the ZAFAA Awards 2011 in the UK; She has also won “Best Actress Award” from the Black Ethnics, Fashions and Film Industry in the UK 2011; Pan-African “Woman of the Year Award” was given to her by ‘All African Media’ based in Ghana.

In addition, she was voted the best actress at the African Oscars in Washington DC, from a list of 32 nominees in Africa People’s Choice Best Actress category. She won the Gathering of African Best (GAB) Awards for her exceptional contribution for promoting a positive image of Africans around the world; an event which revealed the accomplishments of award winning Africans.

Fatima first married Retired Brigadier General Julius Maada Bio at a private ceremony in London on 25 October 2013. Her first and his second, Maada Bio and his first wife Frances Bio legally and amicably separated. In fact, it is a public knowledge that in the 2012 presidential elections, Frances Bio travelled to Sierra Leone to also help in the campaign for the election of Rtd. Brig Julius Maada Bio.

On 27 June 2014, Fatima Bio gave birth to a son, Hamza Maada Bio who died three days after birth. A year after losing their son, she delivered a healthy daughter, Amina Maada Bio.

A traditional wedding
“Rtd. Brig Julius Maada Bio, a devout catholic, asking a hand in marriage of Fatima Jabbie, a devout Muslim, symbolises a politician who cut across religions and has extolled the virtues of our religious tolerance as a nation where a young Christian man can marry a young Muslim woman or a young Muslim man can marry a young Christian woman.”
A second ceremony marriage for culture and tradition was performed in January 2020, Maada Bio decided to complete his marriage rites showing his beautiful bride to his family, friends and hundreds of thousands of his SLPP supporters.

The First lady of Salone….
“In line with her husband’s vision, First Lady Bio believes education is key. Her philanthropic character is inborn and she is a fantastic role model that leads by example. Her greatest strength is her ability to achieve any goal she sets. Some say it is divine, but people close to her say it is pure, undiluted hard work, while others insist it is a combination of both divine intervention and hard work.”

Her first action as First Lady was to stage a peaceful protest against gender based violence. Madam Fatima Maada Bio is said to be motivated by pan-Africanist ideals; a strong believer in women empowerment as key to sustainable development.
First Ladies from different African Countries came together in unity and joined the peaceful protest march on the streets of Freetown in December 2018. This was the beginning of her very powerful campaign themed “Hands Off Our Girls”. 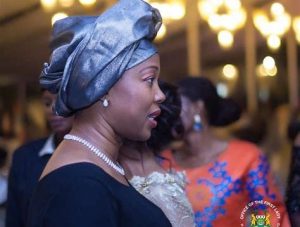 At a time when Sierra Leone like the rest of Africa still faces great challenges whether it is about a legacy of youth unemployment; high rates of child and infant mortalities; a rising cost of living crisis; limited access to clean drinking water; infrequent electricity supply; a clampdown on press freedom; falling standards in schools and colleges and severe hardship; Fatima and her husband understand the daily suffering of ordinary people. With so many pressing issues and areas affecting her country, Fatima Bio with the support and backing of her husband chose the one dearest to her heart: the passion and zeal for women empowerment saw her launching “keep hands off our girls” a massive campaign that calls for universal action to end all forms of violence against women and girls; issues of HIV/AIDS, rape, child marriage, teenage pregnancy, child labor, prostitution, sexual abuse against girls and women.

First Ladies from Sierra Leone, Ghana, The Gambia, Liberia, Chad and Niger launched Hands Off Our Girls Campaign in Freetown of December, 2018
Her Excellency’s fight against Cancer, has gone internationally. She secured the funding of several doctors to study oncology from the Merck foundation. She also hosted the most awareness raising commemoration of World Cancer Day in West Africa on the 4th of February 2019.

She used the Cancer Day commemoration to present to the government and the world, the model for an International Medical Centre. Her vision is to have the most advanced medical centre in the world in Sierra Leone, that will serve the MANO river union, with international affiliation agreements with some of best teaching hospitals in the world.

December 14 2019, she launched the Free Sanitary pads initiative for school girls in Sierra Leone, to complement the government’s free quality education initiative.
With the First Lady expected to arrive here for the TFN Heroes Awards, we take this opportunity to welcome her back home!