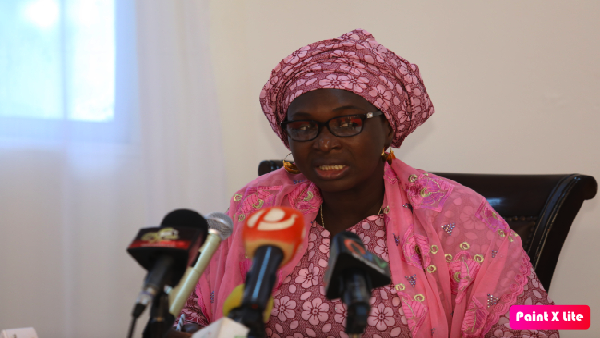 In a rare interview, the director of press and public relations at the presidency, Amie Bojang-Sissoho has explained how she became an important staff of President Adama Barrow.

Speaking in an extensive interview with Standard’s Bantaba, the former Radio Gambia announcer, said: “What I know is that when I was offered this job, I committed myself to serve the country under the leadership of Adama Barrow, being the one who identified me to do that service but I’m not working for him and he knows that. I’m working for the country. But he is the one who is driving that agenda [of the country]. Therefore, if you believe in something, and you commit yourself to it, what you need to do is to make sure you stay professional. My relationship with the president is professional. He knows that, and those around us know that. What I do, I do with professionalism. I don’t go to the president to lie about people or talk about people or idle. I don’t have time for that.”

A daughter of a preeminent Islamic scholar of The Gambia, Madam Sissoho has in the past been criticised for her anti-FGM activism, with a leading scholar Imam Fatty saying her father, the late Hatab Bojang would not have sanctioned her feminism. However, she argued Imam Fatty was wrong, saying: “He [Imam Fatty] didn’t know that my father married Wolofs who, in their culture, do not practise FGM. They should have told him that. Secondly, my father was a very open-minded person and he led his life by knowledge, not emotions. I remember discussing family planning and contraceptive issues with my dad.”

She also discussed her arrest and trial under Jammeh and brushed aside talks that there is ‘too much’ duplicity in her line of work.

Read more on Bantaba on page 4