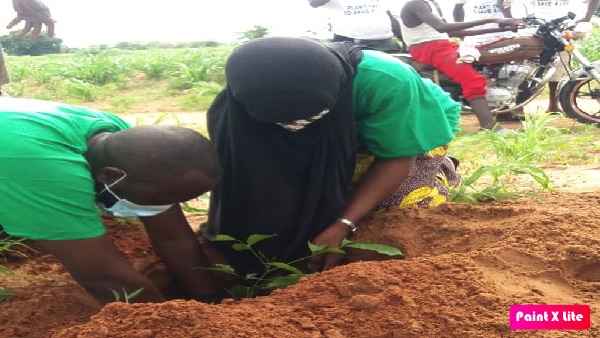 The chairman of TGG, Abdoulie Jawara congratulated his team for the successful exercise, the second since the formation of the organisation. He told the youths that tree planting is a natural remedy in the fight against harmful effects of climate change and urged the young people to take ownership of the trees planted and take good care of them.

Mr Jawara thanked all those involved for their support to the local chapter of the organisation. The Secretary General of TGG, Ebrima Cham disclosed that the organisation is just four years old but has been able to achieve a great deal in humanitarian activities including extending help to hospitals and other vulnerable members of communities around the country.

“Tree planting is as an annual event in our activities. This time around, we planted over 200 mango and 150 mahogany trees in the west side of the village in order to stop erosion and extreme heat in and around the village,” he said.

Cham finally thanked the chairman of the board of directors Mr Batamba Drammeh, his deputy Mr Foday Ceesay and colleagues in the board as well as Ebrima Lincon Camara, the Alkalo and the VDC Chairman Alh Saihou Tijan Drammeh and his team for their outstanding efforts. “We also thank our sponsors and partners for the T-Shirts, Mr S Gumaneh & Brothers, Mrs Mamou Drammeh of DAF Clothing and FOUTA Enterprise Banjul and FC CARGO, for clothing all the participants. We are also paying tribute to our able coordinator Bahoreh Drammeh, who masterminded and coordinated this whole process, ” Mr Cham concluded.