The fourth Stake in the Nation Forum (SNF4) went online, reaching a wider global audience: President Barrow thanks the diaspora for D30 billion of remittances 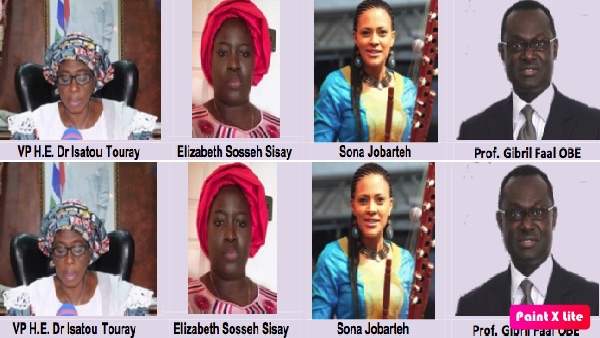 Despite the COVID 19 pandemic, the fourth Stake in the Nation Forum (SNF4) was held – as an online event on 8 and 9 January 2021. The advantage of the online edition of the forum was that all the proceedings were live-streamed, thereby reaching thousands of Gambians across the world. As in previous years, there was an SNF Presidential Statement, this year delivered by H.E. Vice President Dr. Isatou Touray on behalf of H.E. President Adama Barrow.

The President thanked the diaspora for their “patriotism, immense financial input and other development contributions.” Earlier in the proceedings, Dr. Seeku Jaabi, the First Deputy Governor of the Central Bank of The Gambia, representing the recently appointed Governor, Mr. Buah Saidy announced that the interim data for 2020 is that Gambians in the diaspora sent remittances of US$578.5 Million, which is equivalent to 29.6 Billion Dalasis, representing a staggering 48.1% of GDP. In 2020, despite the difficulties faced by the diaspora due to COVID19, remittances increased by nearly a quarter of a Billion US Dollars, from the 2019 figure of US$329.79 Million.

The President through his statement acknowledged that despite their contributions, the diaspora face difficulties in acquiring relevant documentation from agents of government in pursuing ventures, projects and programmes, but gave the reassurance that: “Through the Office of the President, Ministry of Foreign Affairs and other Ministries, Departments and Agencies, we will redouble our efforts to resolve implementation bottlenecks and operational challenges.” He further stated: “I renew the government’s commitment to work closely with the MSDG project and others, to facilitate expanded and enhanced diaspora contributions.”

The forum was organised by the Migration and Sustainable Development in The Gambia project (MSDG) led by Professor Gibril Faal of the London School of Economics (LSE), in partnership with the Office of the President. Stake in the Nation Forum is mandated as an annual consultative event in the Gambia National Development Plan (NDP) as a forum to enable the Gambian diaspora, which is the Eighth Region of the country, to engage with government Ministries, Departments and Agencies, as well as NGOs and CSOs, on a wide range of developmental matters.

Formal keynote statements were given by the Ambassador of Switzerland to The Gambia, H.E. Dr. Marion Weichelt Krupski, who applauded the strengthening of Swiss-Gambia development cooperation and renewed Switzerland’s commitment and partnership with GK Partners, the initiators and implementers of the MSDG Project. The Diaspora Keynote Speaker, Ms. Elizabeth Sosseh Sisay, gave a comprehensive analysis of diaspora-development in the past three years, and made practical and positive suggestions on how to improve future cooperation and development. On his part, the Chairman of the Independent Electoral Commission, Alhaji Alieu Momarr Njai reassured the diaspora, stating that:  “Although we have recently announced a delay in the start of voter registration in Gambia, the dates of Out-of-Country diaspora voter registration remain July 2021”.

Honourable Mambury Njie, the Minister of Finance and Economic Affairs, gave a review of economic policies and priorities of the past three years, highlighting challenges and successes, whilst identifying options to enhance diaspora input. There were 36 keynote speakers and expert discussants and moderators, including the internationally acclaimed award-winning musician Ms. Sona Jobarteh, the academic, writer and publisher Dr. Momodou Sallah, and the Vice-Chair of the Democratic Union of Gambian Activists (DUGA), Mr. Pa Samba Jow. The Special Guest Speaker was Honourable Aboubacry Diallo, Diaspora Member of the Thirteenth Legislature, National Assembly of Senegal, Representing The Americas and Oceania. The three interactive workshops were on: ‘Appreciating and Advancing Gambian Culture in a Changing World’; Development Review: Lessons, Actions and Diaspora Input’; and ‘Gambian Diaspora Voting and Representation: Actions and Logistics’.

On the first day of SNF4 on Friday, 8 January 2021, the MSDG project in partnership with the UK-based social enterprise Yaram Arts, led by Mr Njok Malik Jeng, launched a collection of recordings of traditional Gambian Lullabies, available to be downloaded free of charge. The songs were recorded by diaspora singers Amie Cherry and Kumba Kuyateh. They can be used especially by families in the diaspora to introduce children to Gambian languages and culture, whilst enjoying what Mr James Jeggan Bahoum referred to as: “the lyrical whimsy of Mba Nyaling Woo; the melodious yearnings of Bul Joy Sama Neneh; the rhythmic ditty of Sona Mariama; and the soothing charm of Ayo Neneh”.