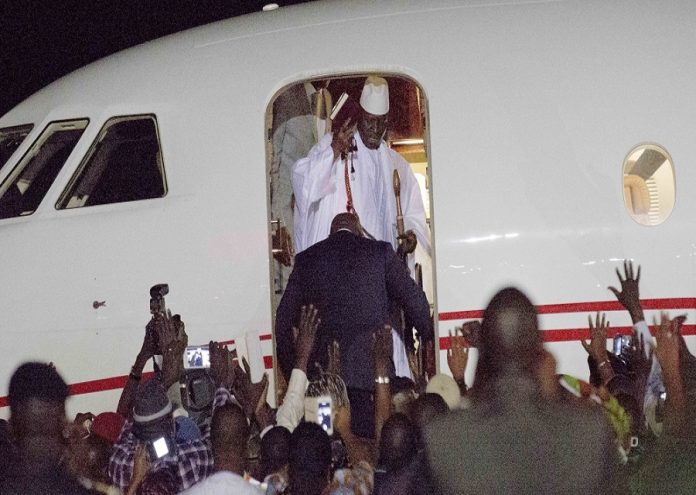 “I announce to you, Gambians, my total rejection of the election results and thereby annulling the elections in its entirety. We will go back to the polls because I want to make sure that every Gambian has voted under an independent electoral commission that is independent, neutral and free from foreign influence.” Yahya Jammeh.

Yahya only agreed to leave when he knew he stood no chance against the ECOMIG Forces. The “ballot box only” narration of history is promoted to vindicate the narrative that Jammeh left because people voted against him as a result of the efforts of the politicians.

While that narration is correct to some extent, it also conveniently shortchanges the efforts of other entities and factors, that significantly contributed to the forced exit of Jammeh. It’s definitely not enough to say that Jammeh left through the ballot box and leave out these other significant events. I call it an incomplete narrative because it’s self-serving to the politicians and neglectful of the efforts of others. Jammeh’s forced exit is not fully narrated when limited to the position that a coalition was formed, it campaigned effectively, free and fair elections were held, Jammeh lost, Barrow took over, Barrow was supported to renege on his promise of three years, and therefore, we conclude that the change from Jammeh to Barrow came though the ballot box! There are many gaping holes in this narrative. Not only does it minimize the critical role of others, it conveniently forgets that were it not for certain events taking place, coalition attempts would likely have resulted in the usual bickering on who should lead it for 2021 as has happened at every other attempt. And no, Jammeh didn’t leave peacefully! He was forced out! “Peace does not mean the absence of war…”

It’s very important that the historical narrative reflects all the facts that contributed to the forced exit of Jammeh. I mean it’s not like any of us had a roadmap on how things were going to unfold or that anyone accurately predicted all that led to Jammeh’s exit. We can all thump our chests today and say what we did but it will be nice to throw some credit crumps at others for their roles too. Heck even my Bandam calls himself a lion slayer! I’m not sure which lion he slayed alone but I would like to see the tail. It’s a confluence of unrelated events that led to the forced exit of Jammeh and the votes of the people, while a critical factor, is arguably not even the deciding factor because Jammeh discounted those votes and wasn’t going push-palassteh ken munutsidarra.

In the end, it was the presence of ECOMIG that tipped the scales against Jammeh when he refused to leave! But the role of ECOMIG somehow gets either minimized or as I have seen some do, called unnecessary! The facts are that ECOMIG came in, surrounded Gambia and Jammeh knew what time it was. His stepchildren claim he didn’t want war and that’s why he left! That’s such a mesmerizing lie if one doesn’t know any better. Jammeh had soldiers manning key locations and infrastructure in a defensive posture all over The Gambia. He wanted to fight to cling on to power for a billion years as he’s wont to quip. Go and listen to the testimony of Major Bubacarr Bah, an explosives expert, on why he was locked up by the NIA during the impasse. He was locked up in an NIA compound in Jeshwang area because he refused to do what Jammeh and Saul Badjie asked him to do! Don’t take my word for it. Go and watch the testimony on YouTube!

A critical factor that the politicians love to ignore and you’ll hardly, if ever, hear any of them speak about, is the burning down of the APRC bureau in August 2016. These gallant soldiers saw what Yankuba Colley and Jifanga Jammeh brought to Yaya at Statehouse and decided they will not stand by and watch their country get cheated at elections again as has been done since 1996. If you recall, you’d remember Jammeh saying thousands of his supporters didn’t get to vote. He wasn’t referring to the Jinns who he said will vote for him if Gambians don’t, he was referring to those cards that perished in the fire at the APRC main political bureau. In those days, who honestly believes that anyone could deny Yahya Jammeh supporters the right to vote??? If those cards were not burnt by these gallant and patriotic soldiers, the coalition would not have stood little to no chance because Yaya would just pad his numbers and get sworn in as president. But hardly, if ever, would you hear any of the politicians mention this important act of patriotism because it does not fit their political narrative of “Jammeh was defeated through the ballot box alone.”

If you listen to the politicians tell it, you’d think that if it wasn’t for them, Gambia would still be in the clutches of a rapist and murderous tyrant. While the politicians played a significant role, it’s also important that we do not devalue the roles of others such as the ordinary man and woman that voted against Jammeh, young soldiers that burnt down the APRC bureau, the diaspora Gambians who contributed their hard earned money, the politicians like Kandeh who risked going against a dictator, foreign minister Mankeur Ndiaye through the Senegalese Government, and ECOWAS, who mobilized ECOMIG Forces to finally force Jammeh out. That was when Seedy Njie, of Barrow now, and others of his ilk, said Yahya is going nowhere before they tucked it and fled to Equatorial Guinea. They’d leave for Equatorial Guinea before the harsh realities of exile quickly sent the Seedy Njies back home. The critical role of the voice of the victims whose cries galvanized the world against Yahya Jammeh and his evil machinery disguised as a government must not be forgotten, but those voices are conveniently made a footnote in the political narrative. Hell, I will begrudgingly even add the role of the opportunistic and spineless evil peddlers masquerading as ambassadors who saw the ship sinking and buried their fangs in the flesh of a dying regime they happily served all that while. Give the devil his due even it served his interest.

When it’s all said and done, the narration of history must not be self-serving to the point of discounting the efforts of others. It should depict an accurate account of events and give credit where due. There are many events and many people that contributed to the forced exit of Yahya Jammeh. Not all efforts were equal but no effort should be diminished or obliterated from history simply because our politicians want us to think that it was all because of them! We can amplify our individual roles or party or group roles without seemingly diminishing the roles of others!