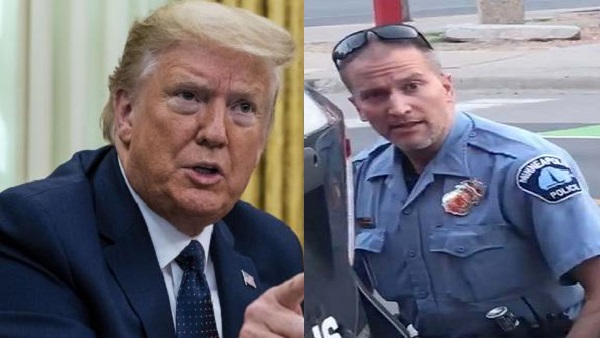 By Suruwa B. Wawa Jaiteh

While almost everybody is taking careful steps adjusting to the abnormalities of the American normal, the rest of our dear world is plunged into so much uncertainty, not only over the global economy, not only over COVID-19 which continues to rage, but also because of threats to peace and security. America is burning, so says its media, over the death of an African-American, George Floyd, at the hands/knees of Minneapolis police characters, led by a man with a history of racist tendencies.

The riots in American cities in the past few days, in outrage over the brutal execution by policemen of a 46-year-old-African-American, George Floyd – even as he was begging for his life and crying “Momma, Momma” in his last moments – has unraveled one of America’s biggest deceptions, which has held thousands of Gambians in thrall: America as the land of milk and honey and as the greatest democracy in the world.

Not a few Gambia United Kingdom-lovers were quick to post on social media the photo of a Gambian lady crying for help in the streets of London. How many of our Gambian-Americans have re-posted that terrible video of a Minneapolis policeman pressing his knee into Floyd until he snuffed out his life?

To be quite frank, one of the things that makes me mad has been the phenomenon of not just Gambians but Africans in general who paint our collective Africa as a backward one where human rights aren’t respected. Why have they not been using their communication skills in exposing the deep injustices and racist attitude in the America they so much love, rather than picking on poor Africa that is being modeled to be a centre of excellence?
The riots are not surprising at all. In just a span of a month, another young African American, Ahmaud Arbery was jogging when he was chased down by rednecks who shot him dead. Police raided the home of a young African American woman, Breonna Taylor, whom they suspected had illegal drugs, and shot her dead.

These happened just as America’s blacks were realizing that in most US cities, African Americans accounted for half and even more of those killed by Covid-19. Why? Because more blacks had underlying diseases? Why? Because they don’t get as much health services and nutrition as whites.

Racist
We Gambians have not realized how racist white America has been, how African-Americans have been getting poorer and poorer, with their access to the asset that could get them out of poverty – college education – getting harder for each generation.
The marginalization of blacks in America has been obvious. Most talk and dress differently, which means that they have not been as assimilated into mainstream US society, as blacks have been in the United Kingdom. Many of them get to live in sections of cities that are clearly black communities.

Fifty years of the so-called affirmative action to improve black people’s socioeconomic situation have not made a large dent on their second-rate status. A report in 2018 by the Economic Policy Institute reported:
“Black workers still make only 82.5 cents on every dollar earned by white workers, African Americans are 2.5 times as likely to be in poverty as whites, and the median white family has almost 10 times as much wealth as the median black family. The rich are getting richer in the US and other European nations (from Piketty, Capital in the 21st Century).

With respect to home ownership, unemployment and incarceration, America has failed to deliver any progress for African Americans over the last five decades. In these areas, their situation has either failed to improve relative to whites or has worsened. In 2017 the black unemployment rate was 7.5 percent, up from 6.7 percent in 1968, and is still roughly twice the white unemployment rate. In 2015 the black home ownership rate was just over 40 percent, virtually unchanged since 1968, and is still roughly twice the white unemployment rate, which saw modest gains over the same period. And the share of African Americans in prison or jail tripled between 1968 and 2016 and is currently more than six times the white incarceration rate.”

Equal
The biggest deception involving America – as well as its major allies (Britain, France, Germany) – is that it is a society where people are more and more getting equally, and getting rich is a matter of merit and hard work.
This notion has been debunked in the past few years with tons of data by the French Economist Thomas Piketty in his 2018 book Capital in the 21st century, and another book by the same author, released just this year, Capital and Ideology.

As Piketty showed, the US’ top decile (the richest 10 percent) owned 40 percent of the nation’s total income in 1900.While this share decreased to its lowest point in the 1980s to about 34 percent, it steeply increased to the top decile owning nearly 50 percent income. While the UK, France and Germany had similar trends, the US was the most inequitable economy. With the poorest decile getting a smaller pie, guess which sector of Americans is getting poorer and poorer? Blacks and Latin Americans.

Compare the fact that Blacks and Latin Americans in the US are getting impoverished to what has happened in China, which is reviled by many yellows here: According to the World Bank, more than 850 million Chinese people have been lifted out of extreme poverty. China’s poverty rate fell from 88 percent in 1981 to 0.7 percent in 2015, as measured by the percentage of people living on the equivalent of $1.90 or less per day in 2011 purchasing price parity terms.

It is not just America’s economic structure leading to the marginalization of Blacks and Latin Americans that is being exposed this year. There is also its much-vaunted democracy, which in the US is proving to be inutile in combating a pandemic that threatens to overwhelm its population.
What kind of system would put an incompetent megalomaniac like Trump to head the richest nation on earth, with enough nuclear weapons to wipe out the planet, if not “democracy”?

The biggest flaw in America’s democratic system is President Donald Trump. Trump, like other failed presidents is just passing the ball to the next administration postponing reality and the pain of responsibility. Empty acts of defiance for four years?