Transitioning from one dictatorship to another – The Gambia under Adama Barrow 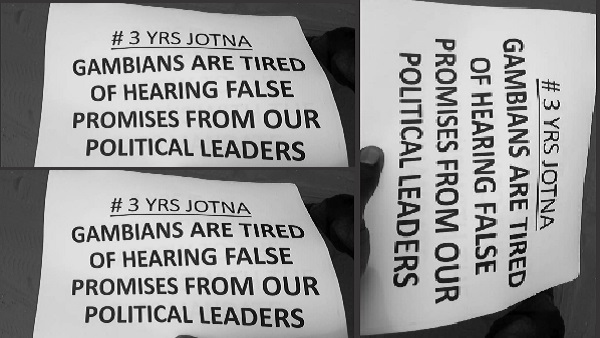 On Friday 10 May 2019, videos circulating on social media showed a group of unarmed Gambian men and women being rounded up, placed in a white pick-up truck and taken to the Kairaba Police station. The protesters had gathered at the Senegambia Beach Hotel junction with hand-written white sheets of paper calling on the political parties that formed the Opposition Coalition in 2016 to respect the three-year term of the transitional Government (and presidency).

The protesters were completely peaceful; they did not commit or even attempt to commit any acts of violence. They did not use a public address system. They simply held pieces of paper and made known their intention of marching towards the Kairaba Beach Hotel where the Coalition political parties were meeting.

I am shocked and dismayed that even this simple exercise of a democratic right to protest on a major issue of national significance, could not be tolerated by the government. The police marched in, rounded up the protesters and led them away to the Police station. It was a brazen act of illegality committed by the police. The actions of the Police violated the fundamental right of the protestors to peaceful assembly, association and to demonstrate without arms. These rights are enshrined and protected under Section 25(1) (d) of the Constitution of The Gambia. It violated the right of the protestors to freedom from arbitrary arrest and detention; and it violated the Government’s obligation under Section 17 of the Constitution, to respect and uphold the fundamental rights and freedoms of every Gambian.

However, of even greater concern is the underlying message of intolerance that the police action shows. Adama Barrow was elected on the back of a brutal two-decade old dictatorship during which the fundamental rights of citizens were violated with reckless abandon and impunity. The President, with eyes wide open, signed a memorandum of understanding in which he promised to head a transitional government of three years and step down. At the time he signed the MoU, he knew that the Constitution provided for a term of five years for the Presidency. He went on to campaign on the basis of a promise to serve for three years if he is elected.

Each and every citizen of The Gambia who voted for Adama Barrow, has a right to demand that he fulfills that promise. It is as simple as that. I have no doubt that each and everyone of those protesters voted for President Barrow in 2016. I am sure there are tens of thousands of other Gambians, who also voted for Barrow and are equally disillusioned by his shameless volte-face. The expectation that Barrow will serve for three years formed part of a social contract between him and the Gambian electorate. His power-drunken and blind political ambition has now driven him to violate every single promise he made to the Gambian people. Gambians have a right to demand that he should be held accountable to the electorate. It is arrogant and self-serving for the coalition leaders to unilaterally seek to alter the terms of the social contract upon which Barrow was elected into office.

The “Operation Three Years Jotna” protest forms part of a national demand that politicians must be accountable to the population. We Gambians must cease popping-up our own mini-dictatorships. From 1994-96, we collectively propped-up a 29-year old high-school graduate from the military and he turned out to be a gruesome dictator; in 2019, we are propping-up another unlettered, power-hungry and inept charlatan who, by all indications, will turn into another monstrous and corrupt dictator!! It is as if the country were cursed. We never learn from history, not even from recent history.

The “Operation Three Years Jotna” protesters have not done anything wrong. They have not committed any crime. They should never have been arrested or taken to a police station. They were simply exercising their political and constitutional right to demand that their government, especially President Barrow, act with integrity and honesty. Such actions by the police show that The Gambia is transitioning from one dictatorship to another. Gambians must NOT accept another self-anointed dictator.