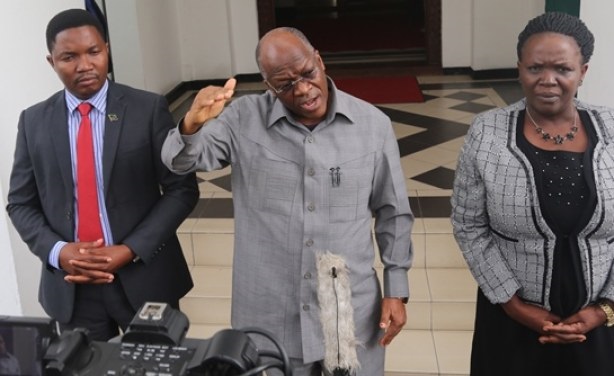 Tanzania’s president has put fighting corruption at the centre of his agenda. But is it worth the suppression of civil liberties? At his inaugural ceremony in 2015, John Magufuli holds a ceremonial shield and spear to signify the beginning of his presidency. John Magufuli began shaking things up on his first full day in office. On 6 November 2015, the newly-elected president walked unannounced into Tanzania’s Ministry of Finance, peering into empty offices and interrogating frightened staff – letting it be known that a government long characterised by laxity was in for a major change.

He later cancelled independence day celebrations and redirected the funding to fight cholera, purged more than 10,000 so-called ghost workers from the public-sector payroll, and initiated a crackdown on corruption and underperformance that saw numerous senior officials sacked, some following scoldings on live television. Africa took notice: Twitter users across the continent adopted the hashtag #WhatWouldMagufuliDo to speculate how he might clean up their own governments. Ten months into his first term, polling by Twaweza, a regional civil-society group, found that 96 percent of Tanzanians approved of his performance. In a country that has long been one of the continent’s most stable democracies, where freedom of expression has historically been protected, that near-unanimous level of approval was astounding.

Since then, a more troubling pattern has set in: In its three-and-a-half years in power, Magufuli’s government has jailed rival politicians, pop stars, and journalists; prevented teenage mothers from returning to school; and threatened mass arrests of LGBTQ Tanzanians. New regulations severely restrict social-media critics and criminalise the publication of data not endorsed by the government. Tundu Lissu, an outspoken opposition Member of Parliament, barely survived an attempted assassination in 2017, and last October, Mohammed Dewji, Tanzania’s only billionaire, was kidnapped for 10 days.

Mdude Nyagali, a young opposition activist, was abducted by gunmen on 4 May; he was discovered last week dumped in a bush and showing signs of torture. Critics say that none of these acts have been thoroughly investigated by the authorities. Now Tanzania’s 60 million people are beginning to realise that the honeymoon period is over, and that their country is more and more being governed by repression. “There’s been a big shift to a much more constricted, constrained environment,” Aidan Eyakuze, Twaweza’s executive director, told me. “People are scared to say what they used to be able to say.”

Eyakuze’s own passport was seized by the authorities after his organisation reported last July that support for the president had plummeted to 55 percent. In some ways, the 59-year-old Magufuli is hardly an anomaly in a region dominated by strongmen. Though much of sub-Saharan Africa saw sweeping democratic gains after the Cold War, political and civil rights have remained stagnant in West Africa, declined moderately in southern Africa, and fallen precipitously in the East and Central sub-regions since the mid-2000s, according to the think tank Freedom House. While new leaders in Ethiopia and Angola have made notable recent strides toward openness, democracy in Tanzania’s neighborhood is hardly robust. Leaders of three of its immediate neighbours – Uganda, Rwanda, and Burundi – have clung to power beyond their original legal mandates and preside over some of the world’s worst human rights records.

In the Democratic Republic of Congo, former president Joseph Kabila has positioned himself to rule by proxy in retirement. Although Kenya, East Africa’s economic powerhouse, has avoided the “presidents for life” syndrome, its elections are regularly disputed. Tanzania long stood out as an exception. A single party, known today as Chama Cha Mapinduzi (CCM), has ruled the country since Tanzania’s 1964 creation as a merger between the former British colony of Tanganyika and the British protectorate of Zanzibar. But Tanzania’s leaders have respected term limits, and tolerated a vibrant opposition since the adoption of a multiparty system in 1992.

The country has never experienced major civil conflict. Many credit Tanzania’s first president, Julius Nyerere, with forging a strong sense of national identity, which minimised the ethnic divisions that continue to plague many countries in the region. Yet Nyerere’s economic policies, including a failed scheme that resettled millions of people into planned villages, also left a legacy of underdevelopment. Even as economic growth accelerated over the past decade, Tanzania remained notorious for its slow pace of life and a government often paralysed by waste and dysfunction. Hassan Abbas, the chief government spokesman, says superfluous trips and unnecessary workshops – frequently at beachside resorts – were rife. Magufuli, the son of peasant farmers who earned the nickname The Bulldozer during his road-building tenure as minister of works, changed all that.

He greatly restricted civil servant travel and has yet to leave the continent as head of state. Few would dispute that accountability under his rule has risen – Abbas boasts that Magufuli has “relieved” more than half of his cabinet ministers. While some question the lack of due process, many Tanzanians support this drive against impunity. Twaweza polling in November 2017 found 85 percent of citizens believed that corruption had declined from five years prior. Felista Mauya, an attorney with the Legal and Human Rights Centre in Dar-es-Salaam, says stronger oversight has led to notable improvements in key public services, such as healthcare. “This president came into power with a certain vigour and zeal to make sure things are happening,” Abbas says. “We want to see a Tanzania that is running.

” At the same time, Mauya and other civil society activists say the assault on civic space has been sustained and vigorous – a result of both top-down decrees and legislation written by the CCM-dominated parliament. Magufuli’s government has banned the live broadcast of debates in Parliament and enacted regulations imposing hefty fees on bloggers.

It has also actively enforced a 2015 cyber crimes law, signed by his predecessor, Jakaya Kikwete, that was intended to combat the spread of false information but also designates jail time for “insulting” the president and has been used as part of a wider campaign against dissent. And it has severely restricted opposition rallies, despite the fact that they are allowed by law; several opposition politicians, including Freeman Mbowe, leader of the main opposition party, Chadema, faces charges of sedition. Magufuli’s “muscular nationalism,” as Eyakuze calls it, includes an intensifying war on information.

In February, authorities suspended The Citizen, a leading English-language daily, for a week after it reported a decline in the value of the Tanzanian shilling and a slight discrepancy between rates on the street and at commercial banks. Amendments to the national statistics act passed by Parliament in September prescribe jail time for communicating or disseminating any data “intended to invalidate, distort, or discredit official statistics.” Critics fear that this will stifle independent research, like the polls carried out by Twaweza – which now has to seek permission to conduct its next round of surveys – and outlaw third party oversight of crucial government data.

“Economic management in a democracy means that people need to have a shared understanding of reality,” says Justin Sandefur, a senior fellow at the Washington, DC–based Centre for Global Development, who formerly advised Tanzania’s National Bureau of Statistics. “The government is working really hard to make sure it has a monopoly on that shared understanding.” Coincidentally or not, these amendments come amid growing evidence that Magufuli’s top-down economic management has led to unintended consequences. Although the World Bank forecasts 2019 GDP growth to exceed 6 percent, Tanzanians from various walks of life report that money is tighter – in Twaweza’s July poll, 72 percent of respondents mentioned poverty as a major challenge for the country, compared with 34 percent before Magufuli took office. Restrictions on the export of grain and a bizarre plan to cut out middlemen from the cashew industry have rankled farmers.

Businesspeople say the crackdown on corruption has had the unintended consequence of making it harder to do deals, and rising policy uncertainty has compelled banks to withhold lending. Acts of resource nationalism – such as the levying of an extraordinary $190 billion tax bill on London-based Acacia Mining, initially met with praise at home – are making foreign investors wary. Last month, the Tanzanian government blocked publication of an IMF report that warned of “unpredictable and interventionist policies” it deems likely to significantly hinder economic growth. The suppression of civil liberties has caused some development partners to withhold funding, while a drive to collect taxes, including from petty traders who have long operated outside the formal economic system, has further squeezed the poor.

Richard Fabian, who sells kingfish, barracuda, and red snapper along the bustling Dar es Salaam waterfront, says the economic situation now is the worst he’s experienced in his 15 years on the job. Sales have been so poor that his wife and children have returned to their home village because he had to downsize his rental from a family house to a single room.

Fabian, like 58 percent of the electorate, voted for Magufuli in 2015, and despite his predicament says he appreciates his cleaning up of government and may support him for reelection next year—particularly if the economy begins to rebound. He may not have a choice: Newly passed legislation gives a state-appointed registrar sweeping powers over internal political-party matters, which opposition leaders say puts the country on a path toward becoming a de facto one-party state. Hashim Rungwe, an attorney and the chairman of the Chaumma Party who finished fifth in the 2015 presidential election and is considering running again, says the prospect of a free and fair vote next year is highly dubious. And democratic space, he fears, will only continue to decline thereafter. “We are going backwards,” the 70-year-old says from his Dar es Salaam office. “Only one person is giving orders. And when he orders, you comply.”

Money and Markets in collaboration with JONATHAN W. ROSEN a journalist reporting from East Africa and supported by The Masthead, The Atlantic’s Membership Program.

- Advertisement -
Share
Facebook
Twitter
Pinterest
WhatsApp
Previous articleLetters: African youth arise for people and nature
Next articleCoalition governments: Should the current administration in The Gambia set the structures of democracy and development or uphold what was inherited?
Join The Conversation