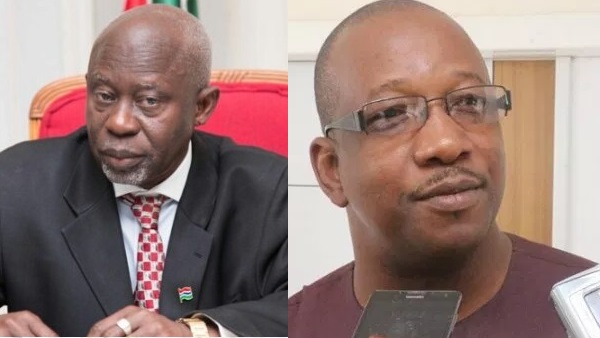 The leadership of the United Democratic Party (UDP) has learnt with great distress and indignation, the death of Ousman Darboe, a Serrekunda Market vendor, following his detention and eventual release from police custody.

The UDP extends its sincere condolences to the family, friends and colleagues of the late Mr. Darboe.

The UDP urgently calls on the Minister of Interior to ensure that a speedy investigation into events surrounding the death of Mr. Darboe is conducted.

Findings of this investigation should be made public. Should, as the Serrekunda youth claim, the cause of death be related to his arrest, the UDP expects those found wanting to be brought to justice.

Unfortunately, Mr. Darboe’s death led to violent protests, looting and an arson attack on offices of the anti-crime unit and the home of its Unit head, Mr. Mboob.

The UDP condemns such violent acts.

The Party also commiserates with Mr. Mboob and all other victims of such violence.

As a law abiding Party founded on the principles of the promotion of peace, the UDP recognizes the basic Constitutional rights of Gambians to Freedom of Assembly and Freedom of Expression.

However, the UDP encourages Gambians, particularly youths who wish to assemble and to protest to respect the Constitution, the laws of The Gambia and to demonstrate respect for the authorities.

The UDP condemns the excessive use of force and calls on the Inspector General of Police, the Minister of Interior and the National Security Council to ensure that the Police Intervention Unit and Crowd Control teams undergo the necessary skills training to control public gatherings and to ensure order with minimal violence.

On a separate issue, the UDP also condemns the violence with which the Police dealt with peaceful protesters of the Occupy BAC, which also unfortunately led to violent scenes in Brikama on Wednesday 24 July.

The UDP acknowledges that the Inspector General of Police (IGP) has the discretion to issue permits.

However, UDP encourages the IGP to work towards concrete efforts to widen the space for assembly and for expression as spelt out in the 1997 Constitution of the Republic of The Gambia. Further, the IGP where he cannot issue permits should specify to the requestors why, at that specified period and location, Gambians who wish to express themselves cannot be allowed to do so.

The UDP understands that such anger as demonstrated by Gambian youth this week is not and cannot only be interpreted to be related to the death of Ousman Darboe and Occupy BAC. Rather, it is our view that these actions are linked to the general frustrations of the youth on a host of issues including but not limited to Police violence.

Gambian youths are disillusioned that after having endured and dislodged a 22 year dictatorship, very little has changed in terms of democratic norms.

Corruption and cronyism continue to affect service delivery across the board; unemployment is still high while the environment adversely affects job creation initiatives.

The UDP calls on the Government of The Gambia to not only create the enabling environment for Gambians to publicly speak out on issues of concern to them but to also act on improving on the situations that lead to those concerns.

The UDP seizes this opportunity to call on the Party’s youth in particular, Party sympathizers and the Gambian people to desist from any form of violence as a form of expression.

The Secretary General and the Executive Committee of the UDP thank all Gambians and reiterate our calls for calm, restraint and non-violence.”

GDC
Meanwhile, the leader of the Gambia Democratic Congress (GDC) Mamma Kandeh also expressed his party’s position on the incident.

“As I extend my condolence to the family of the deceased I want to urge the authorities to conduct a swift and an impartial investigation into the incident,” he said in a press release shared with The Standard.

He continued: “I want to call on Gambians to exercise restraint, calm and be law-abiding on both sides of the confrontation.

I am extremely sad and sorry for the death of Ousman Darboe a market vendor and in the same vein urge the protesters to resort to dialogue”.

Kandeh said he will cut short his overseas trip to return to the Gambia to play his role.

Interiorreacts
The Ministry of the Interior deeply regrets the death of Mr. Ousman Darboe, a 33 year old Serekunda market vendor and expresses its heartfelt condolences to the bereaved family andloved ones.

Mr Darboe whose death has led to allegations of Police brutality followed by angry demonstrations on Wednesday was a known asthma patient who was detained by the Police Anti-Crime Unit and subsequently granted bail. He died a week later at a local health facility and not under police custody.

However, my ministry takes allegations of torture and police brutality very seriously and has attentively listened to all your grievances, complaints and resentments against our law enforcement agents.

Therefore, a Committee of independent investigators from all the security sectors has been constituted to thoroughly investigate and determine whether Mr Darboe was tortured as alleged.

Should the investigation reveal that he died as a result of torture, those implicated will face the full force of the law.

The Ministry also seizes this opportunity to extend the condolences of the entire security apparatus of The Gambia to the family of the late Ousman Darboe as they go through a very difficult period of mourning the death of such a loving, caring and responsible husband, father and parent. We are deeply saddened by Ousman Darboe’s demise and pray that our independent investigations bring healing and closure to Ousman Darboe’s death.

Ousman’s unfortunate and sad death led to violent protests in the Serrekunda Market, Bijilo, Bertil Harding Highway and other areas within the Greater Banjul Area resulting in sporadic looting and violent attacks against innocent Gambians on Wednesday, July 24.

While we sympathise with the bereaved family and are deeply saddened by Ousman’s death, we appeal for calm, patience and understanding as the investigators meticulously probe the circumstances leading to his death.

Unfortunately, as demonstrations against alleged police complicity in Mr Darboe’s death were raging in the KMC area, another tense demonstration was taking place against allegations of financial corruption and incompetence directed at the Brikama Area Council.

In both places, the security forces had to intervene to keep the peace and restore calm.

It is against this unpleasant picture festering its ugly head in our young democracy, that we sincerely appeal against all acts of vandalism and looting as they are unlawful, violent, inhumane and potentially dangerous.

If police stations and private properties are vandalised and looted, it is the Gambian people that bear the brunt and everybody will be a loser.

The Ministry further reminds the public that The Gambia is governed by a Constitution and that the Government of The Gambia seeks to promote a culture of rule of law.

Laid down procedures for all activities that are to be undertaken by either individuals or group of people in a public space, including protests must follow due processes key to which is requesting for and obtaining a permit via the competent authority (The Office of the Inspector General of Police).

The thinking behind this is to ensure the protesters have security, that the process is orderly while at the same time protecting other Gambians and their properties in case things get out of hand.

The public is advised to desist from taking the law into their own hands.

Mob justice and or self initiated justice have no place in our national laws.

Equally, it is imperative for the Gambian population to note that “WE”, Government and citizens alike, must work hand in hand to nurture our new found freedoms. Democracy does not mean doing or saying anything you like. All and sundry must observe the rule of law to safeguard the peace and democracy every Gambian and non-Gambian alike are enjoying.

In light of the above, the Public is advised to desist from such violent and unlawful activities that can undermine the peace, security and stability of our dear nation that is reeling from 22 years of violence and dictatorship.

We thank you all for your understanding and cooperation. God bless The Gambia and her people.