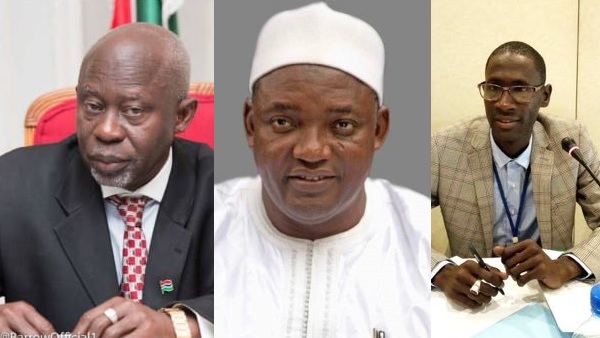 Saikou Marong, the United Democratic Party national assembly member for Latrikunda Sabiji, has said that “even if he was left with President Adama Barrow alone” he is going to continue empowering the Gambian leader.

Marong is among some UDP NAMs accused of rebelling against the party which facilitated their election to sympathise with President Barrow’s political agenda.

“People are saying that I have joined the Barrow Fan Club or the Youth Movement.

That is not the case.

What I want to say is that even if I am left alone with Adama Barrow I will continue to empower him.

I will not be the obstacle to the National Development Plan.

I will always push to ensure that it becomes a success,” he told The Barrow Media Empowerment yesterday.

Marong further stated that he could not sit by and watch Barrow fail in his agenda to develop the country.

“Whether people like it or not, I am the sitting NAM of Latrikunda Sabiji.

I think people should be honest in their assessment and stop looking at me as an individual.

What is important is whether I am fit to represent the people of my constituency in the assembly and anyone who feels he/she doesn’t understand that, well you own your vote,” he said.

In apparent reference to the recent challenge by UDP leader Ousainu Darboe, who tasked the rebel NAMs to test their new-found popularity if any and resign, Marong said he will come back in the next election and will win to show all that he represents Latrikunda Sabiji.

“The 2021 NA election will demonstrate to people who I am and who the people of Latrikunda Sabiji are.

That is the time people will know I am representing the people of Sabiji and not any individual interest.

I am coming back; I will win again and If anyone doubts that let them wait for me at the polls,” Marong warned.

The Latrikunda NAM further revealed that he went all the way to Basse to attend a UDP rally but all he got there were insults.

“Should that be the case? Enough is enough; I cannot take it anymore,” he complained.

Marong said people should criticise the government when necessary but the criticisms should not be personally directed to President Barrow.

“We should maintain the peace and tranquility in this country.

We should be very careful with what we do or say.

President Barrow is a five year president and anyone who doesn’t like that can go back to your party.

If Barrow desires, he can resign after three years, but if he wishes to stay for five years he has the full backing of the constitution,” he stressed.