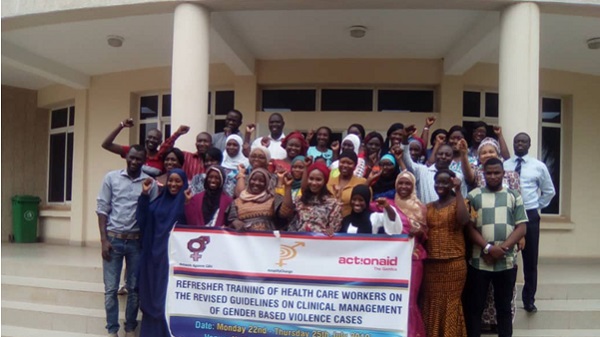 Network against Gender Based Violence (NGBV) in partnership with ActionAid International The Gambia last week completed a training for 30 healthcare.

The training seeks to broaden these workers’ knowledge on the revised guidelines on clinical management of GBV cases.

Halimatou Jallow Jesuorobo, NGBV program manager, said the network formed a membership organisation comprising of more than 50 members to address the issue of gender-based violence, which remains an issue in the country.

“…Our strategy is to train healthcare workers or reorient them to be able to give better care to victims of gender-based violence,” she said.

Dr Momodou T Nyassi from Bansang General Hospital, said gender-based violence has been affecting women all over the globe.

“It is also affecting men indirectly because when your wife, daughter or sister has been abused sexually or domestically, obviously you as a man will be affected,” he stated.

He highlighted the goal of the training as a refresher training designed to help participants on how to recognise gender-based violence, how to manage and treat the issue.

“Whether we know it or not, abuse cases are happening every day,” Nyassi said.

“This is the first time that healthcare workers have a guideline that will assist and support them in managing cases of gender-based violence in The Gambia.”

The four-day convergence brought together doctors and senior nurses of various health departments.

“We are delighted to have staged this very important training on GBV,” Sowe noted.

He called it a milestone in the crusade to combating all forms of gender-based violence in The Gambia.

The clinical guideline on GBV or Gender-Based Violence, was first developed in 2013 by the government in partnership NGBV.